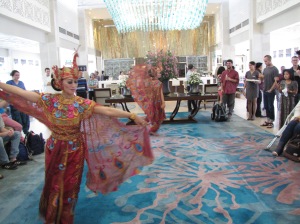 For the last two weeks I have been in Bandung, a hip city about two hours away from Jakarta on the island of Java. I wanted to write sooner, but we were unbelievably busy in umpteen different sessions.

Alas, I am back in Home Sweet Home, Pangkal Pinang. The dancers on the right were there to greet us in the lobby two weeks ago in Bandung. Homecoming in PP wasn’t quite as flashy but far more exuberant. Here I thought Ibu* Isnaini was going to pick up Caitlin and I with her husband, but we had a whole entourage of teachers, students, and extended family members.

It started when a teacher at Caitlin’s school recognized us at baggage claim and we chatted a bit in broken Indonesian and dramatic charades. Our bags were among the last to come out, so Ibu Isnaini & Co were quite happy to see us when we finally did make it outside. We were whisked through some small streets that I have never seen before and stopped to have soymilk and snacks at a warung** on the way. Most things have fish in them, which presents a challenge for me, but there were coconut cakes and spring rolls that were filled with CHEESE, of all things. You order soymilk (hot or cold), eat your fill, and then pay for whatever you ate once you are satiated.

When we got home, there were a couple of nice surprises. The most life-altering being this nifty little thing: 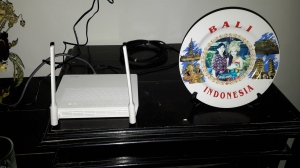 Hallelujah! (Just to clarify: I am referring to the box with the antennas, not the souvenir plate.) Do you know what this means? It means that

And it works! Do you know what else this means? It means that I can study Bahasa Indonesia more effectively. It means that I can make awesome lessons plans with all of the resources of the Internet at my disposal. It means that there will be music all the time. It means that I can be a reliable Co-Editor-in-Chief for http://indonesiaful.com, a website run by Fulbright ETAs in Indonesia for which I now have partial administrative responsibility. And of course, it means that I will (hopefully) check in more often here at my own blog. Basically, life has never been better. 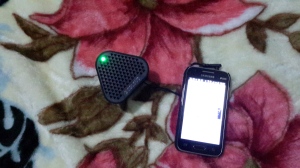 In related news, while in Bandung I also got a smart phone! It is a Samsung Galaxy V Plus. Thanks to the fact that I have been using a Samsung tablet all summer (Thanks Uncle Dave^2 and Tom!!) it is quite easy to navigate. Jury’s still out on whether or not it will work in the States, but that is not so much my concern at the moment. When I got the phone I also got a non-wireless speaker that just needs to be charged and plugged into a music-emitting device to work. The sound quality is only okay but it will be suitable for my purposes at home and in the classroom. Even better is that I can plug other speakers into it to amp up the sound.

Hmm… There is a lot to say about the past couple of weeks. I have some pictures to share from Bandung, but those will have to wait until later. Meanwhile, it is almost 9 p.m. and I feel:

* Ibu is the polite form of address for an older woman. It can translate to Mrs., though it literally means Mother. So in a way, every woman in Indonesia is Mom. The same goes for Bapak, or Pak for short, which means both Mr. and Dad.

** Warung refers to any type of small, family-owned business, but it is most often used (among foreigners at least) to refer to small, sidewalk eateries.

5 thoughts on “Welcome (Back) to Pangkal Pinang”