The compound question that functions as the title of this post is one that I find myself asking with increased regularity. When the question is voiced, it is usually accompanied by a smile, headshake, and eyes to the skies.

Take last night, for example. My new friends are Nigerian soccer players who live and work (i.e. play soccer) in Vietnam. Their Vietnamese is excellent and one of them has a scooter. So we met up, had dinner at a local place. Food for vegetarians is easy enough to come by. I asked someone to write out “I am vegetarian” in Vietnamese to make it easier to explain the situation.

Dinner finished, Kennedy (the one with the scooter and flawless handle on the language) suggested that we go to a club. Yeah, sure, why not. I was thinking Ybor city and felt up for dancing. So we were off, passing through a nice part of town, until we pulled into a parking lot packed with scooters and Toyotas. We dismounted and went to an outdoor elevator where a man wearing black slacks, a pressed white shirt, and a red tie escorted us up. If his tie was black and a little bit thinner maybe he could have been a Mormon missionary.

Up, up, and ding. Doors slide open. And… The Macarena? Yup. And the dance floor, which was a real parquet dance floor, was filled with Vietnamese men and women, young and old, swiveling their hips just like you would see at a nieghborhood block party in the States. Who would have thought? The three of us took a seat and watched the floor. The Macarena was followed by some more line dancing. I tried and failed horribly to join the line – three more hours of the same song and maybe my efforts would have been passable. But these people knew how to move it! And to all different kinds of music. Waltzes, a country-Western Christmas ballad, a variety of Latin dances. Young men dressed identically to the one that met us at the elevator were on hand to pluck the wallflowers and help them bloom. I went out a few times, staying in a corner and struggling to keep the rhythm. For the most part I was content to observe and ponder: where am I and how did I get here? Local Vietnamese dance club was not exactly on my list of things to do, but what an interesting place to end up.

Towards the end of the evening there was a break for free-style dancing to electronic music. One lady (who I hope I am like fifty years from now) was dancing and pulling me in with a smile. Finally! I was up and in the crowd of families jamming to remixed Western tunes. Crossing cultural boundaries, baby!

Today was filled with museums, including the jail where John McCain was held when he was a POW. Of course the museum was one-sided, but conditions could have been much worse for the “pilots in pyjamas” held there. I also went to the women’s museum (Loved it! My respect for the women that I see here is greatly increased.), the Temple of Literature, and Ho Chi Minh’s mausoleum. All in all a good nine hours of ambling through the streets of Hanoi.

Tomorrow I have a three-day tour booked to see Halong Bay. The company was recommended by my bunk mate, who was good-naturedly woken up while I was rustling through my bags at his bedside. (Ah, the joys of hostels. No better way to meet people.) The tour will include kayaking, swimming, biking, trekking, a homestay, and beautiful views of the bay’s many islands. The picture below is like the one on display at the travel agency. Wow, right? Apparently a lot of travelers will go on party tours here, but my tour will be quieter and more cultural. I hope. 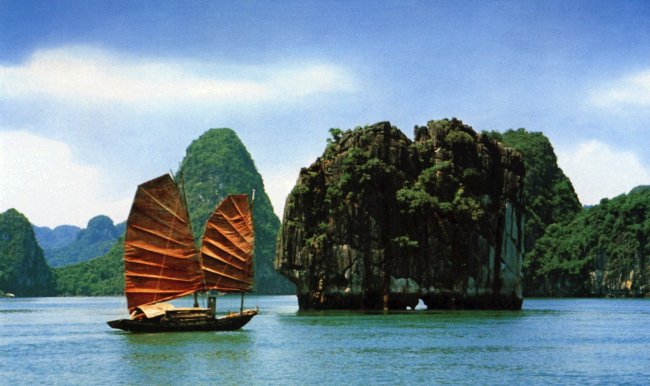 So that’s the deal for now. Peace!

3 thoughts on “Where am I and how did I get here?”