At long last I am out of Savannakhet and have found myself in the town of Vang Vieng. Vang Vieng is about a four hour drive north of Vientiane, the capital, and is a popular backpacker destination. The reason is obvious: the confluence of water, mountains, and forest is stunning. This town is known for being a party town as well as an adventure destination. Both reputations are deserved, I suppose.

The party element stems partly from tubing on the river, which was once lined with bars. Tubers would stop, drink, and continue tubing. A lot of tourists died over the years, and recently the government has cracked down, though a handful of bars are still on the river and hordes of tourists can be seen in tuk tuks, huddled next to their tubes, going upriver to participate in this backpacker “right of passage.” Relatively easy access to drugs also feeds Vang Vieng’s party reputation. From opium tea to mushroom shakes to pot pizza, you can pick your poison and its administration. And of course, alcohol is cheap and abundant.

All that said, there is plenty to do in Vang Vieng that doesn’t involve stepping out of your gourd. Tubing/kayaking down the river, which is surrounded by lushly covered limestone karsts and rice paddies, is plenty relaxing if you are sober. There are some waterfalls nearby, caves, local villages, trekking opportunities, a rock climbing school, and a hot air balloon. I asked about the balloon, hoping to tick something else off my bucket list, but it only operates during the dry season. Bummer! I’ll just have to come back.

Still, I have been enjoying the other adventures on offer. Two days ago, I did a kayaking/caving tour. One cave was filled with water, and we had to sit in a tube and pull ourselves along a rope strung along the inside of the cave. Each person was given a headlamp, and off we went. My tour group included an extended family from Malaysia in Laos for a week on holiday, but there were tons of other people on the same route, pretty much all of them Asian. Going into the water cave was like stepping into an ASEAN meeting held in a Chinese swimming pool: it was absolutely packed and the babble of different Asian languages bounced off the walls and the water. But we were all equally helpless, lounging in our tubes, and we could only get through the traffic jam by pushing and bouncing off other tubes. It was a pretty funny experience and had me asking “who thought of this?”

After the initial crush the crowd thinned a bit, and it was just one line of tubes following the guide rope. At the end of the rope, we were able to stand and walk hand-in-hand through the strong current to reach a dry cavern with an impressive stalactite formation. The next cave was barely more than an opening in the rock, with some Buddha statues inside and a rock that maybe kind of looked like an elephant, giving it the name “elephant cave.” From there, it was a twenty kilometer kayak downstream back to town. Some rough water kept the ride interesting, and the scenery continued to be beautiful. I didn’t take my camera for obvious reasons, but below is a picture taken from the main street in town of the karsts. The river lies between the town and these towering rock formations.

Yesterday, I got up early and rented a bike with the intention of going to a couple waterfalls marked on a map I got from the tourist information office. The bike was a town bike, with no gears, shoddy brakes, and a basket on front. It cost 15.000 kip for the day (about $2) .Mountain bikes are available for twice the price, but I figured the street bike would do the job. It did, but that bike wasn’t really meant for the ride I took.

I started out by heading east, away from the river and across an airstrip left over from the Vietnam War. You could still land a plane on it. The cement and gravel is still solid and there is not much activity on the strip besides the occasional wandering cow or dog. Mornings are pretty foggy here, making for a dramatic (if somewhat gloomy) view of the rocks: 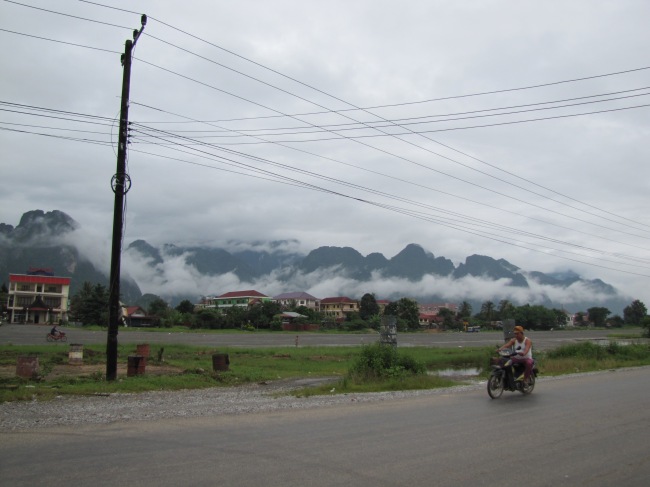 Shortly after the airstrip, I hit a sign (courtesy of the remarkably well-done Tourism Department) directing me to the waterfalls, which were six kilometers down a hilly and unmaintained road. You name it and the obstacle was there: mud, rain, sand, water, rocks, livestock, the occasional motorbike careening around corners at dangerous speeds. The hills were steep, and I had pity on the poor bike that was clearly not meant for 45% inclines, whether it be up or down. With practically every incline, I was forced to walk the bike up, and going down I had to say a little prayer and ease on the brakes. The brakes squealed with the effort, and got their revenge by locking up a few times. It was slow going, but absolutely necessary. The one time I did let off the brakes, I flew downhill and up the next incline so fast that I hit some rocks the wrong way and had to lay the bike down. By that point I was going pretty slow, so my injury was limited to a scab being torn off my big toe, which led to some blood that made it look worse than it was. Otherwise, I was fine.

But the scenery! I endured about 15 kilometers of abominable road conditions on a sub-par bike for the gorgeous nature. Greenery was absolutely everywhere, a pristine river followed the road in a gorge below, there were zero human sounds, and the couple villages I did pass through seemed to be a decade or two behind. They had electricity, but it was still pretty primitive.

And of course the waterfalls were lovely. A tourist bus nearly pushed me off the road so it could arrive ahead of me, which was a bit of a bummer. The tourists were Laotian/Thai, and a number of people asked to take pictures with me. OMG, a foreigner! And she’s traveling… alone? Yes, yes, and yes, you can take a picture. At least tourist buses are on an agenda so the don’t stay for too long.

Getting to the falls from the entrance was a bit of an adventure in and of itself. This view was from the trail of the main falls: 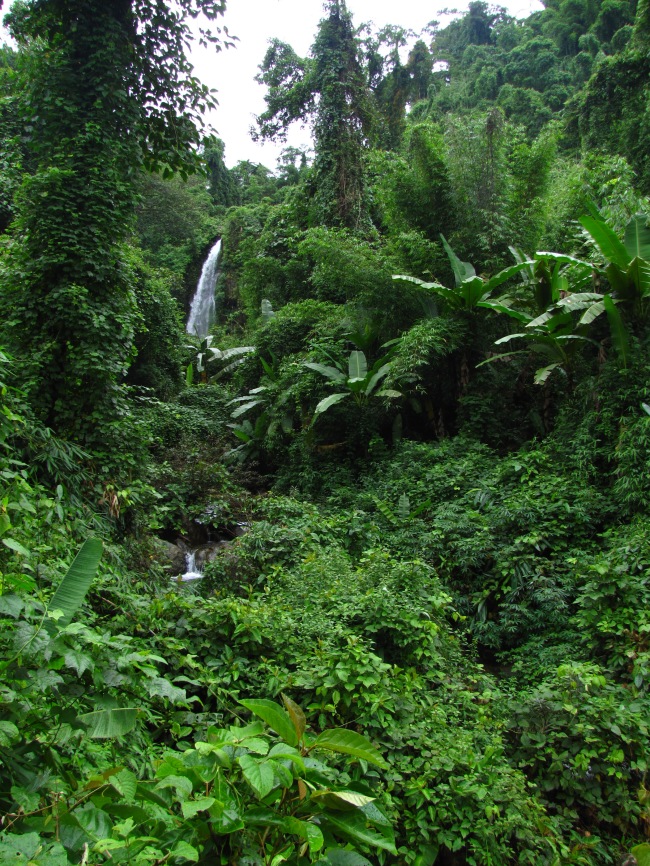 This one is from the observation deck when I got closer:

A highlight of the day was the abundance of butterflies by the falls. I just can’t believe the variety! Someday I would like to come back and go butterfly-watching with a guide to the butterflies of Southeast Asia. Some trekking in Laos would let me check a good number off the species list, that’s for sure. One butterfly in particular was attracted to me. It fluttered around me for a few minutes before landing on my elbow, where it stayed for about a half hour. I got some nice shots of it with a waterfall in the background, and then waited for it to fly away. It didn’t. Instead, it rode on my elbow, licking at my sweat, while I walked across wooden bridges and climbed ladders. It didn’t seem bothered in the least by all the movement, and in fact other butterflies came to land on me when I took a seat after some climbing. In that moment I had three on my and more fluttering around, and I felt like the butterfly whisperer…

So today is the first day of September, and it has been a pretty lazy day so far. I slept in, started reading a new book (The Dharma Bums by Jack Kerouac), watched a documentary on the application process for Cirque du Soleil, wrote this post, and next… more reading? Some tubing? We’ll see, but I am determined to enjoy the last three weeks of this trip. Love to all!

chroseblog
Sarahann vs. The World

Everyday discoveries in lands far and near

The Chronicles of Krupa

Please refer to elainewanderlusts2.wordpress.com for updates

De Voir Le Monde
Where in the world is Kelly?

A tale of a girl in Indonesia

“It's not what you look at that matters, it's what you see.” ― Henry David Thoreau

A year in Indonesia as a Fulbright English Teaching Assistant

Candle or the Mirror

"There are two ways of spreading light: to be the candle or the mirror that reflects it." - Edith Wharton

All for the Love of Wandering

An ex-farm girl, part-time poet, and English teacher, wandering at home and abroad.

Writings, news, photography and reflections from across the archipelago.