Happily, this post was written before the SD-USB converter went AWOL so there are a few pictures for your enlightenment and enjoyment. I am back “home” in Thailand, but won’t be making it back to Yasothon in the last week (week in the singular… less than two before I leave!) so I wanted to put up these pictures of my last visit before I leave again. End of one chapter, start of another. 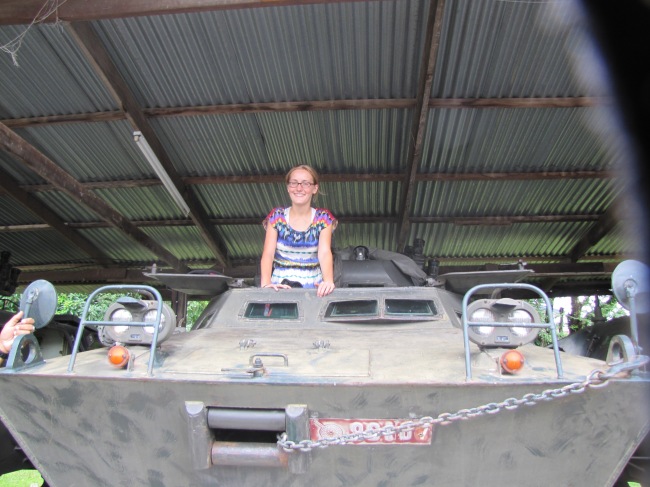 One of several tanks on the compound where Meh works. I still think it is funny that they encouraged me to climb in a fully functioning tank. Now I wish I would have asked to go for a test drive… 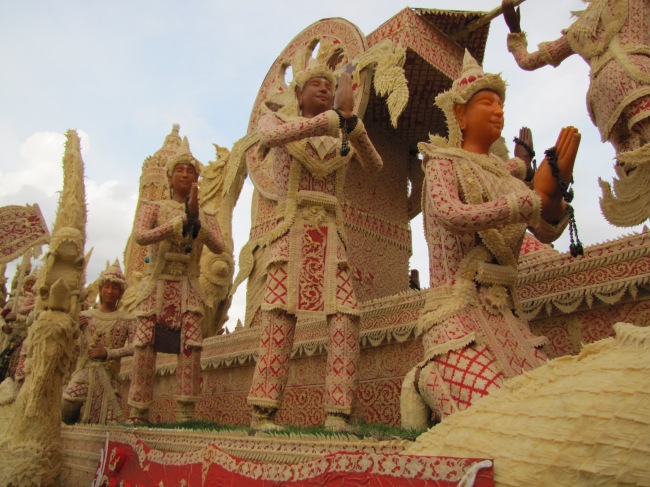 Kao Pan Sa, or the start of Buddhist Lent/the rain retreat, was only a week or so before my arrival. Part of the festivities include different temples making elaborate wax candles floats. This is part of one of many floats. The structure is wooden, but all the fine detailing in the wax takes months to prepare. This float was just for show, but Ubon is famous for its real candle that is meant to burn for the entire three months of the rainy season. During this time, monks are meant to stay in their temples and devote their time to religious study. They are not supposed to travel for fear of stepping on any new life that grows in the rainy season. Of course this is loosely followed in practice, but the principle is good. 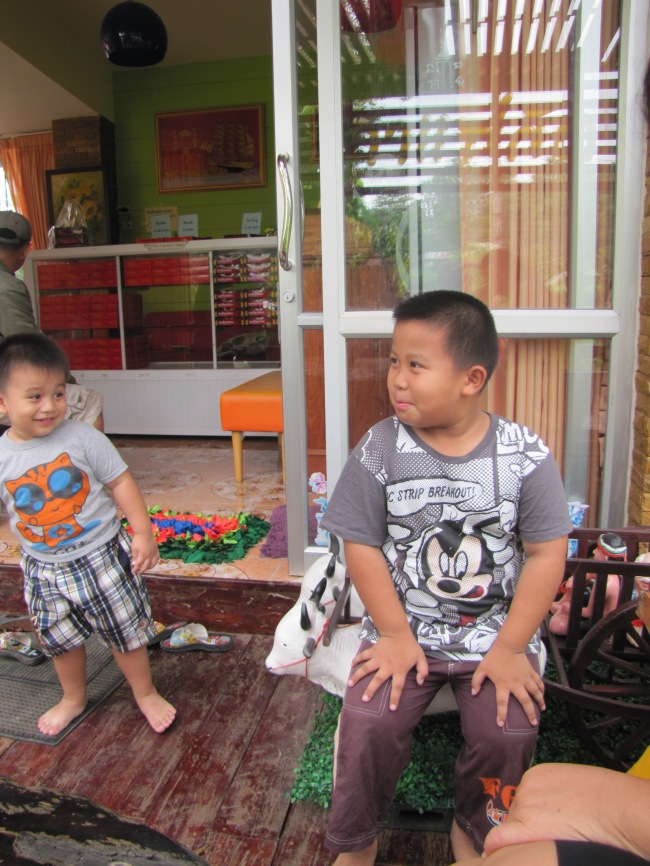 Nong Pete is on the right and Nong Chip is on the left. Don’t let Chip’s innocent smile fool you; he is a rascal of the highest order. 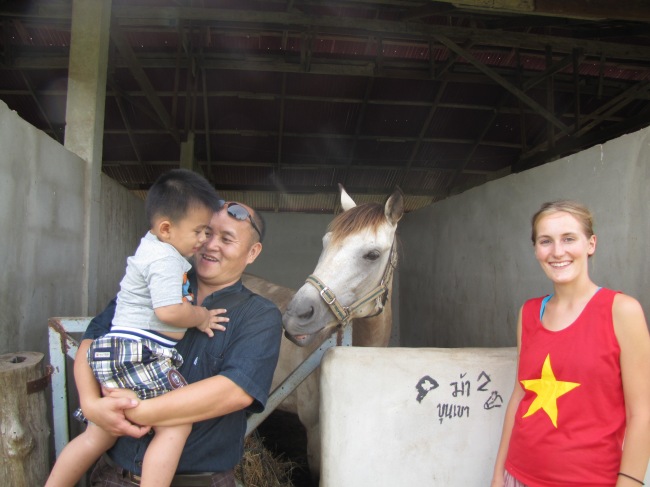 Somehow Paw knows all kinds of interesting places to visit that are less than an hour from home. One day we (Meh, Paw, Mackey, P’Pat, Nong Pete, Nong Chip, and me) piled in the family car and went to a few different places. A horse stable was one stop. No one was at the stable when we pulled up, so we let ourselves in and had a look at the horses. 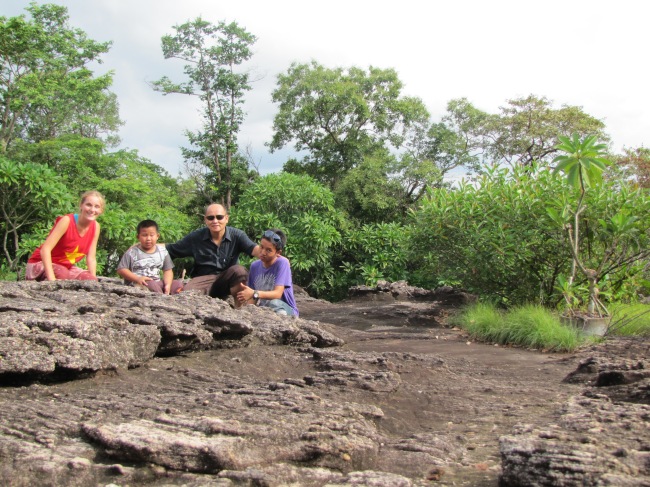 Later that same day, we went to a temple on a hill. Paw led us kids (and I really do feel like a little kid when I am in Thailand) around on some trails and through some really narrow crevices. There were tons of mosquitoes, but it was a fun little adventure. 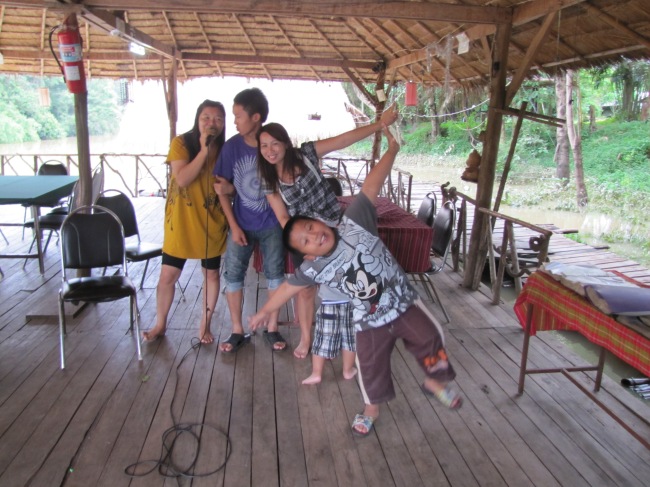 At the end of our day trip, we went to a restaurant on a river. Each table has its own floating hut, and there was a larger space with karaoke. Everyone got in on the action, and I even (attempted) a song I know that has some English lyrics, but I butchered the Thai parts. Meh (the one with the microphone) picked a slow song that I was able to read fast enough to sing, so after this picture was taken we did a duet after a bit of protesting on my end. 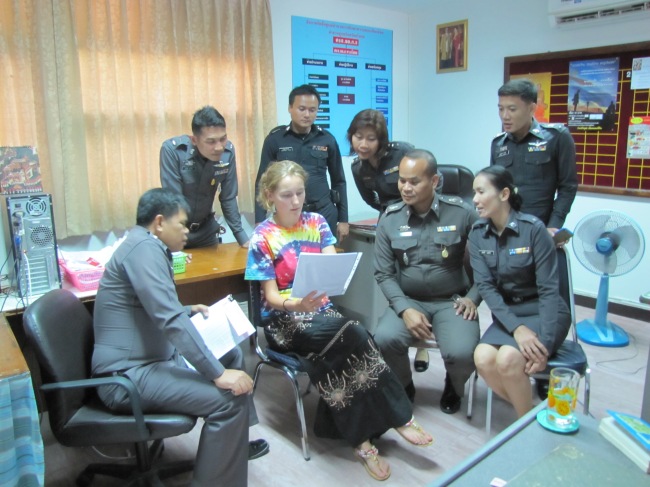 ASEAN (Association of Southeast Asian Nations) has decreed that a certain level of proficiency in English be reached in its partner countries by 2015. Thailand is taking this pretty seriously, so one day Paw invited me to his work to take some photos to make it look like a foreigner is teaching English at the Yasothon police department. It was all about appearances for the big bosses and everyone knew it, but it was still kind of fun to do. And hey, it actually looks like something is being done. 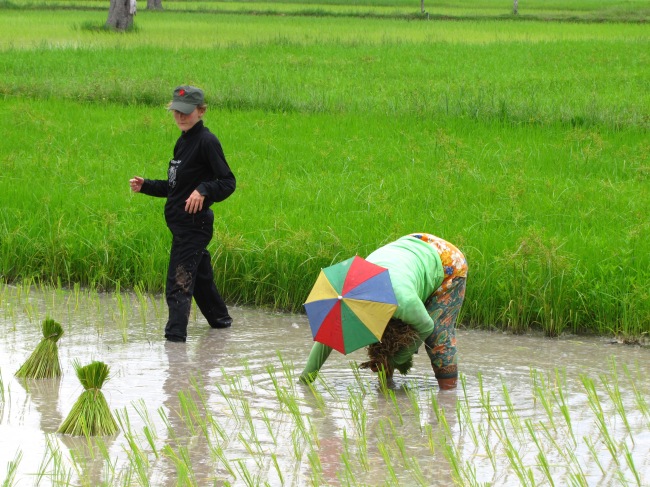 I moved in with my host family in October 2010, so I wasn’t with them during the rainy season. This time I made up for it and learned how to “dum na,” or replant rice seedlings. My aunt (wearing the umbrella hat) was much faster at it than me, but that’s what happens with years of practice. It was tough work and I wasn’t even out there that long. 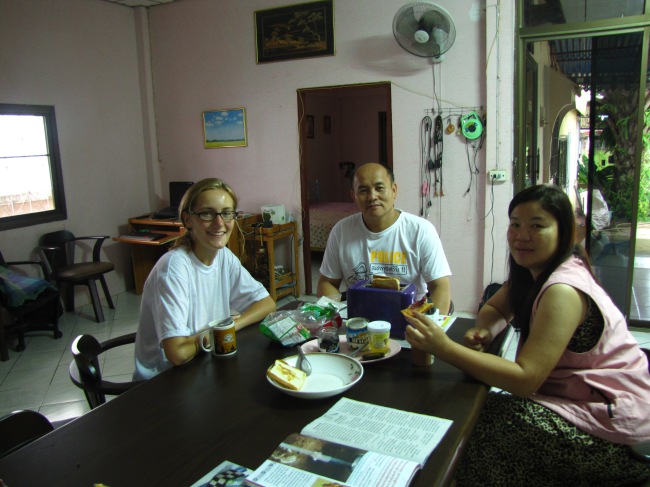 Paw got bread so we could have a breakfast “like foreigners.” Berry jam and pineapple jam with sweetened, condensed milk (so bad for you but tastes so good) were the spreads on offer. The toaster also branded the image of a bunny face onto one side of the toast, ensuring a cheery morning. 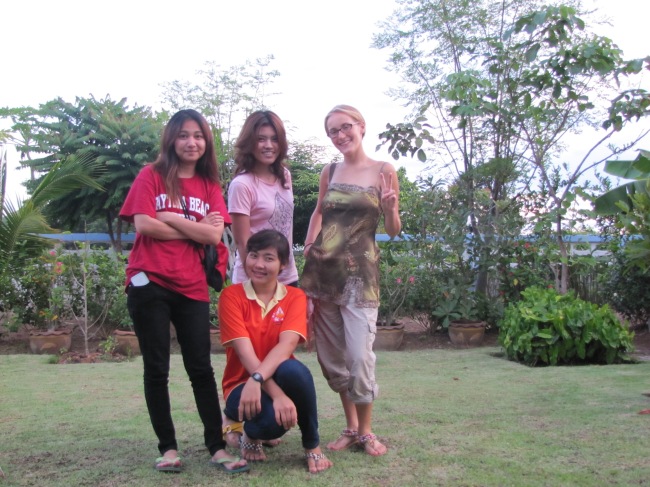 Ajarn Ratsamee, the teacher who was a guide and temporary host for me, invited me, May, and Mackey out to dinner. May in in orange, her friend Am is in pink, and my friend Nikki is in red. Nikki has been to the States twice, and was most recently there working at a restuarant on Daytona Beach for her summer. She had to answer the phone in the restaurant, which is not a job I would envy. After her experiences, she says that Americans are crazy. Can’t say I’ll argue that one much since we are louder and more demanding than most Thai people.

Note: Thai schools have summer break from mid February to early May, though this is slated to change with ASEAN. From now on they are going to synch up with the Western time frame. Bummer for upcoming foreign exchange students since when I was there I had three months at the end of my exchange year to travel and enjoy being in Thailand before coming home for another summer break. 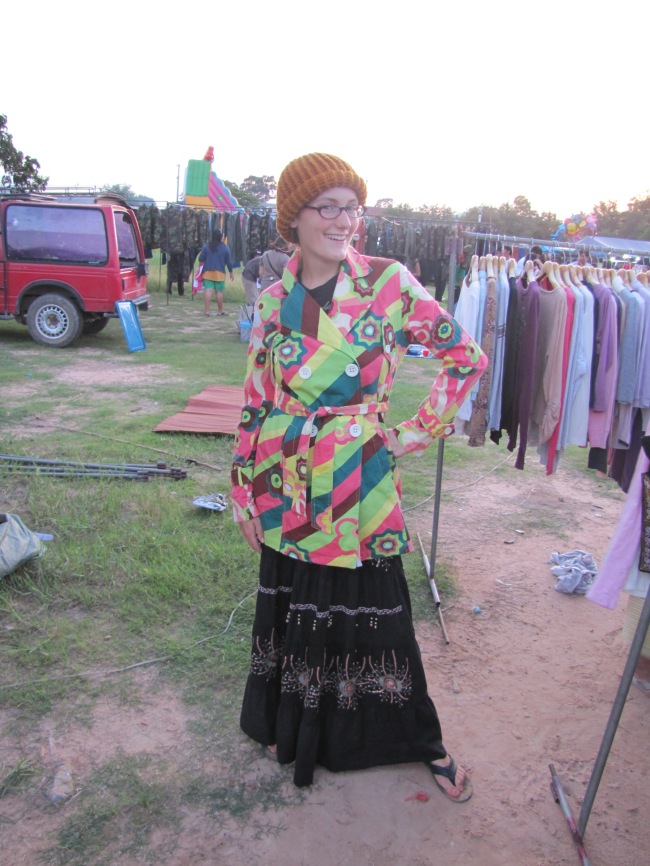 My last night, May and I went to a secondhand clothing market. I don’t know how else to describe that jacket other than saying its pretty groovy, man. I got it for 20 baht (about 70 cents) and am dreaming of wearing it at Oxford. At the moment, it is sandwiched between books and dirty laundry in my pack and due the warm climate here won’t see any action for awhile. But when the chills come on, watch out world!

The hat is the same one that is worn by monks in the winter, and I enjoyed putting my hair under there and wearing it around. Meh made it herself and gave it to me to wear in England. Aww! 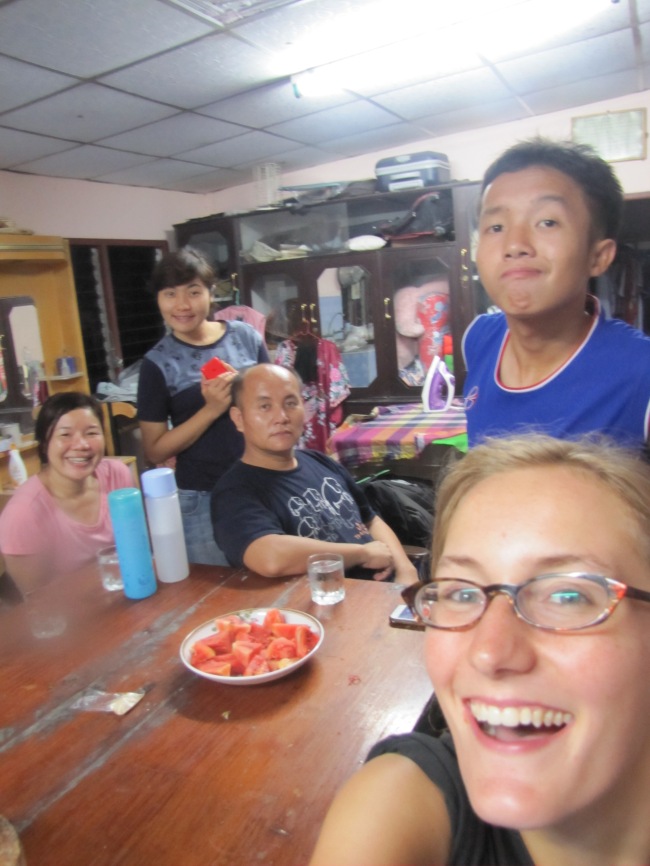 Family portrait! We never seem to get a good family portrait until it is time for a) food and b) me to go. The last meal was eaten at the kitchen table, which we have never done before in all the time I lived there. At least this time I didn’t cry the whole time, but I did express my love and made sure to get pictures with everyone.