It is 9:00 on a Thursday morning of an even week. That means… an essay is due! I was taking a bit of a gamble by leaving it so last minute (the computer could have stopped working or some other horrible, unforeseen circumstance) BUT the email with attached essay was sent out with a time stamp of nine o’clock on the button. I nearby church was almost through tolling the hour when I hit send. Whew.

And now… to begin writing another essay due this time tomorrow. Lordy lordy! But first I thought I would do a little catch-up here and maybe lay down for an hour or two to make up for the successive five hour or less nights I have been doing this week to catch up on work. This week I have been looking at “how can we understand involuntary migration” (i.e. refugees and human trafficking) and how ethnomusicology relates to the recording industry. The essay for the former is now submitted and the essay for the latter is forthcoming. It is obvious which one is more fun to work on. Learning about new (to me) music through academic endeavors? I am listening to Dr. Feelgood’s Down by the Jetty right now.) Writing about concert experiences? (I discussed certain elements of Suwannee Springfest, which I attended once I knew I was coming here to study ethnomusicology, in my last paper.) Going to and participating in music events as a part of the course? (Another Hindustani vocal class tonight!) Yes yes and yes. There is work involved (I read from 8 a.m. to 2 a.m. yesterday with maybe a total of six hours of break) but there is fun to be had as well.

Aside from the joys of work I have been and will be keeping busy in other ways:

This past weekend my dad came in for a visit. He was flying through London on his way back from a work trip to India and managed to extend his layover for the weekend. (Thanks for your help with that one, mom!) We met up at the King’s Arms on Friday evening after I saw the Vice President of India, H.E. Mohammad Hamid Ansari, give a speech about Identity and Citizenship in India.

Transcripts of his talk were included in the evening brochure, which may prove useful as my next essay will be about how migration changes identity. That is what I love most about the humanities and my liberal arts education thus far: everything connects somehow. But I digress… We met at the King’s Arms and it was almost surreal to walk into this pub and then there he was! We talked, laughed, cried, had a few pints, and then laughed some more. (Dad, could you email me the pictures from that night so I can post them? Thanks.) On the way home I stopped at a Halloween party hosted by some OSAP (Oxford Study Abroad Programme, the program that brought me here) friends while dad continued on to my house and was let in by the lovely Miss Deeya. Overall it was a good night.

And our weekend! Saturday was a long day with the highlights of:

– Getting a great view of Oxford from the top of the University Church bell tower. Yet another thing to check off the Oxford bucket list.

Dad is responsible for the pictures above and below. He noticed both the nice framing of the archways and the fact that a child was playing on a tomb located in the garden next to a café. 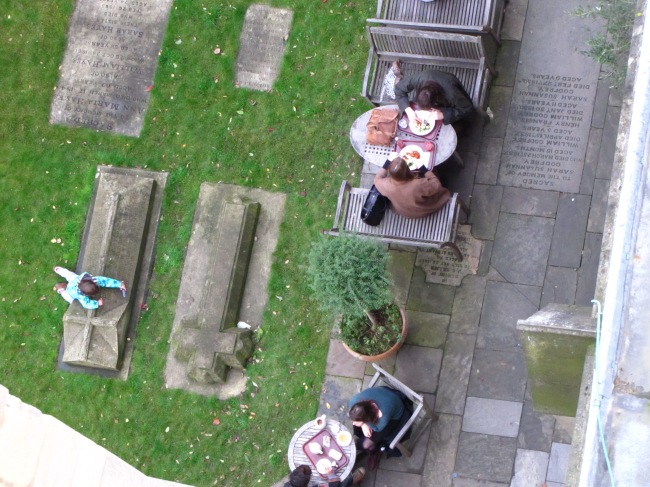 – Going to a lecture about pigeon whistles and then (what else?) having a few pints with the speaker, my tutor, and other people in the inner circle of Oxford’s ethnomusicology group. What fun! It was one of those moments when two people from different spheres in your life that you have always wished would meet actually do.

– Then we went to a concert called “A Moment of Mishearing” and combined Indian ragas with Western popular music. Amit Chaudhuri was the mind behind it and he did a wonderful job.

– Sunday was pretty relaxed. We went back to the Pitt Rivers Museum to finish browsing the collections then went inside Christ Church. I had to use the excuse of returning books to library (which was true!) to get dad past the porters. From there we accomplished yet another goal of finding oxen in Oxford. They couldn’t be persuaded to cross the nearby river but we did find them!

– Thus satisfied, we stopped at Head of the River, a pub (with no ciders on tap! Marks down for that though the waterfront location makes up for it.) before taking a stroll down to Iffley, a neighboring village with a church with unique architecture. Dad took tons of pictures of houseboats docked along the way. We had lunch outside at Isis, a pub reached only by foot, bike, or boat, before continuing on to our destination: St. Mary’s church in Iffley. The stained glass windows were nice: 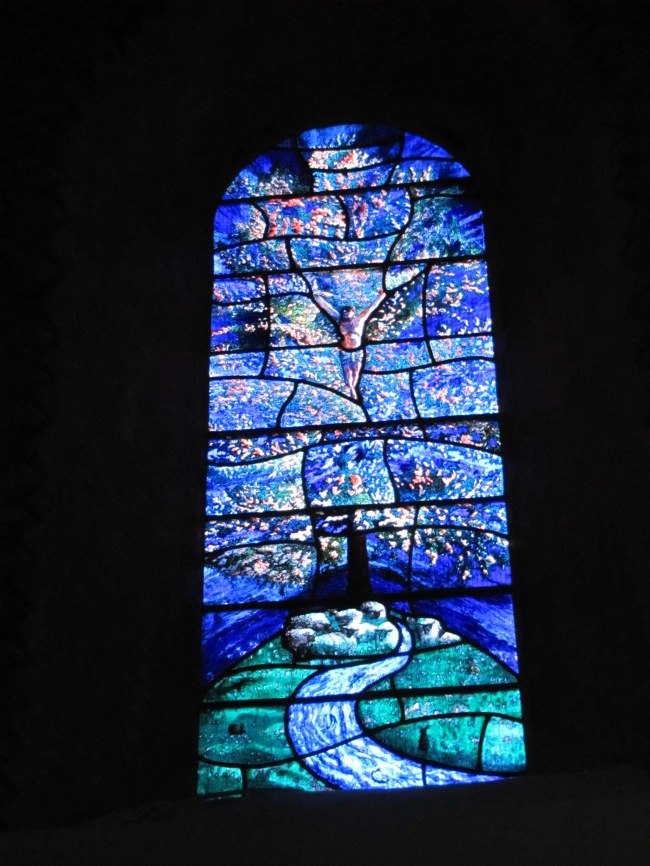 – We finished the night at another pub (it is what people do here!) and had a pretty early night in. He had just come from India, after all, and the time difference is significant.

Since then I have a done a few other things, including a formal vegetarian-only dinner at Christ Church. I was allowed to bring as many guests as I wanted so I brought nine other OSAP students who are parts of different colleges. It was my first time eating in college and was great to share with so many people. And hats off to Moira for getting the wine!

Below is the interior of Hall. It was the one used for Harry Potter, though for us there were no floating candles or magically appearing plates. But the food was excellent! I am behind Khristian and Allison. (The picture is on Facebook so it is already in the public domain, so I hope they don’t mind my reposting it here for its comedic value.)

This week the Pitt Rivers museum has a number of Tibetan Buddhist monks in residence. They are making a sand mandala (below) that will be completed on Saturday and destroyed on Sunday. Ars longa, vita brevis…? Sometimes ars brevis too. Such is life. 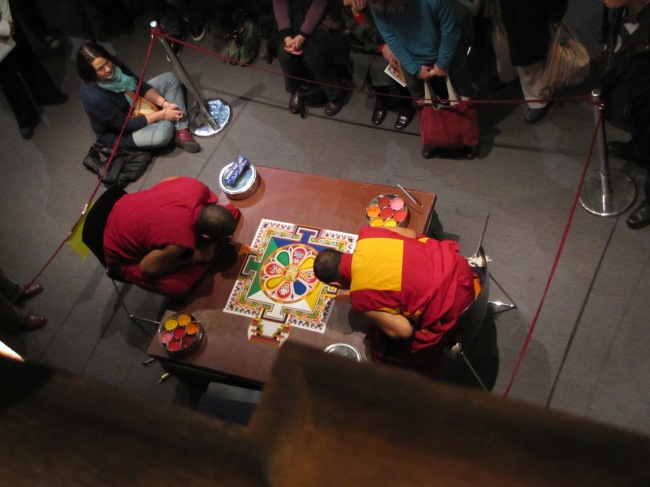 Last night the museum was open late for a variety of Tibetan-themed activities, including chants, a lecture about the Buddha in pop art, and various workshops in mandala-making, prayer flags, and the Tibetan language. The language comes from Sanskrit and I was excited to see some noticeable similarities between it and Thai.

Tonight will be something completely different: I have tickets to see Cabaret. I have listened to the soundtrack too many times to count and I have always wanted to see the live performance.

This weekend will be busy, including a visit to Cambridge on Saturday and fireworks and bonfires that evening.

Until then, it is back to work. But perhaps a nap is in order first…