“After this, I’m heading south to see the solar eclipse,” a coworker told me yesterday afternoon. “NASA sent me viewing glasses weeks ago,” he added rather proudly. I imagine that those glasses are a glimpse of the galaxy, decorated with a smattering of stars and a conspicuous American flag next to the NASA logo tucked somewhere in the mix.

I couldn’t help but add: “You know, last year I saw a solar eclipse and we just used camera film. It worked fine, we could see the whole thing.”

He looked at me like I had suggested he put his head in a trash compactor. Another co-worker who was listening in, a woman in her 70s, tsked my far-fetched notion. “Oh no, that wouldn’t do. You don’t want to burn your retinas out, now do you?”

Thusly rebuffed, I nodded politely and listened quietly to my co-workers expound on proper solar eclipse protocol. As they carried on (funny how everyone is suddenly an expert), it dawned on me: I’m not in Indonesia anymore.

Granted, I’ve been back in the States for over two months. Sure, I know that I’ve been home for some time now. Visible differences are obvious: I wear different clothes, eat different food, bathe myself in a different way. These things are easy to get used to. What are harder to adjust to are the things you don’t see, like how people around you view the world and their place in it. Nothing has illuminated these differences more clearly than observing how Americans and Indonesians view a natural phenomenon like the total solar eclipse.

My first solar eclipse occurred just last year when I was living in Pangkal Pinang. The eclipse itself occurred on a Wednesday morning (March 9th), though our “eclipse party” started the day before when Caitlin and I piled into a car with our neighbors. We headed to Koba, a city about an hour south of Pangkal Pinang. The trip took almost four hours because all of Pangkal Pinang’s residents had the same idea. Traffic was at a standstill, though spirits remained high. We had piles of snacks and a USB that could play music for days. Local politicians provided entertainment with signs they had erected along the way, putting poorly photoshopped images of themselves and their posses on larger-than-life banners with images of solar eclipses ripped from Google serving as the background. Each sign had a different slogan, all using some form of Gerhana Matahari Total (Total Solar Eclipse), though the Indonesian witticisms eluded me at the time. 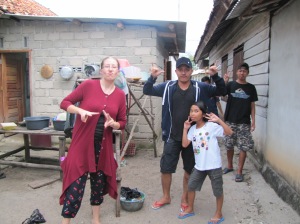 Nearly four hours later, we arrived at the home of a relative of our neighbors. He lived across from the beach in Koba and he and his family opened their doors for us and dozens of other extended family members. Caitlin and I and our neighborhood friends spent the afternoon walking on the beach and the evening playing dominoes. No one got much sleep; the excitement of the eclipse combined with the festive atmosphere that accompanies family gatherings (not to mention the jet fuel that passes as Indonesian coffee) kept everyone up late.

After a few sweaty hours of tossing and turning, Caitlin and I rose with suara adzan subuh, the pre-dawn call to prayer. We showered quickly, thankful we were able to rinse off the night’s sweat before a line formed for the house’s single, modest facility. We were the first to leave the house, eager to claim a prime spot on the beach before the sun rose. Even at that early hour, there were plenty of other people on the beach. We sat down in the sand and waited. Other family members joined us, some bringing snacks and drinks for everyone to enjoy as we waited for the magical moment at 7:30 a.m. 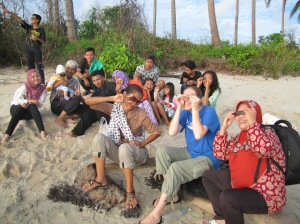 At last, the moon and the sun met in the sky. In a foolish attempt at preparation, I had bought a cheap pair of sunglasses at the grocery store a few days prior. Thankfully, someone in the family had the foresight to bring camera film, which (as I told my co-worker) did the job well. One strip of film was cut up and shared so that everyone could have a front-row seat at the theater in the sky. We waited with bated breath, the entire beach full of people straining their eyes toward the heavens. The silent dance continued overhead, and during those brief moments when the entire sun was eclipsed a palpable excitement rippled through the crowd. Here it was! Darkness in the daytime! We waited. We watched. We wondered in awe at the cosmos.

Just as quickly as it came, it was over. The sun and the moon parted ways, star-crossed lovers never to meet again.

Until now, of course. You know, solar eclipses happen around the world every year or so. The next one is due in Argentina/Chile in July 2019. Sure, the eclipse is a special, possibly once-in-a-lifetime thing for those who see it. But what really strikes me is how Americans view this global phenomenon as a uniquely American event; just look at how the news has taken to calling it the “Great American Eclipse.” Is this just a marketing ploy? Perhaps. But it also points to something deeper: how very self-absorbed the American psyche is.

Yes, we Americans are very self-absorbed. We obsess over rules. We have an overwhelming need to appear knowledgeable. We must have an opinion on all kinds of issues–even as mundane as appropriate eyewear for a solar eclipse–and it is our birthright to state those opinions as fact. For the average American, there is only one way to do things and that is the American Way, anything is unpatriotic.

In contrast, Indonesian people don’t agonize over following regulations. There are many ways to accomplish the same thing. While most Indonesians are fiercely patriotic, the average Indonesian citizen is more likely to recognize the plurality of the world we share than the average American citizen.

I am not saying that one culture is better than the other; my point is that they are simply very different. Having lived in both cultures, there are definitely things I favor in each place. One thing that we have in common, though, is the way events like tomorrow’s eclipse excite us and bring us together to celebrate the wonders of this amazing world we all call home. 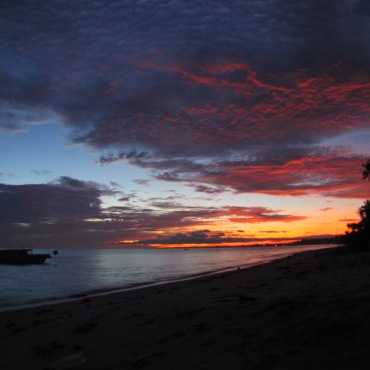 The beach before the sunrise. 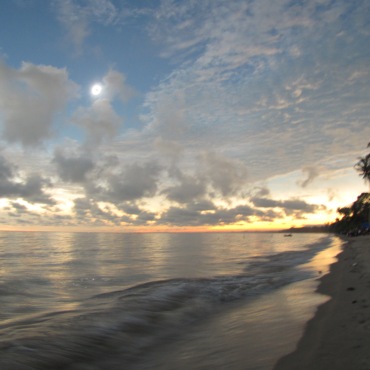 The beach at the peak of the eclipse.