Woe is ye, grumpy traveler! Without a paddle, off the map, up the wall! Since my last post I have been giddy, grumpy, and everything in between. But I’m here now! Here being Hue (pronounced Hway, short and fast. Think Stewie Griffin asking “what” and you get the idea.) Vietnam, a good distance south of Hanoi.

Not long after my last post, I found the girl who sold me the bus ticket, who then passed me off to a guy with no English abilities. I was told to follow him, so what else could I do? I went along with a handful of other tourist sheeple. We were left at a piss-soaked street corner, heckled by hawkers (more like vultures), and told that the bus would be there soon. Wait we did. Again, what else can you do?

But oh, ye of little faith! The bus did come. It was a “sleeper bus,” which I haven’t seen before now. As we (the other waiting passengers included a group of young lassies from Ireland and another group from Scotland) were loading our bags in lower cargo hold, it appeared that there were no more seats. Hopefully no one would be sleeping on the floor! Again, have faith in the system. There were just enough spots for everyone. I was in the back with the other girls. It looked kind of like this: 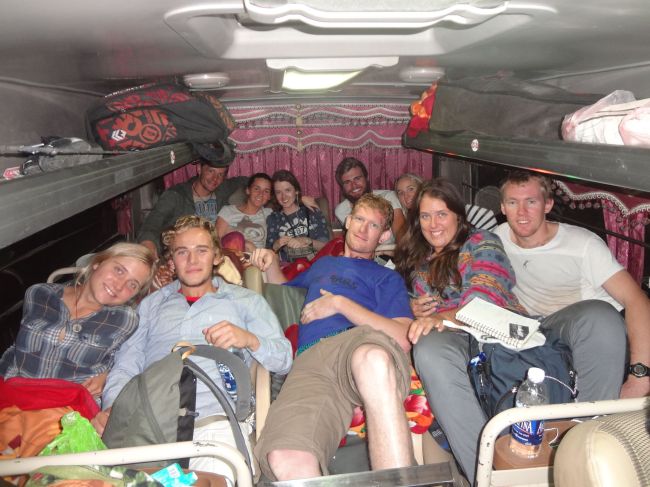 One big lounge party! I was with the Scottish girls and we talked about the differences between the UK, England, and Great Britain; destinations, past and future; and Disney movies. Needless to say, it got a bit silly in the back of the bus.

But what a journey! I don’t know what is more at cause, the roads or the bus itself, but it was one bumpy ride. To try to walk down the aisle while the vehicle was underway would surely land you quite unexpectedly in another passenger’s lap. We stopped every few hours to use the toilet and stretch out, but the bus was really quite comfortable. At least in a reclining position one’s feet are less likely to swell as mine did on the trans-Pacific flight.

Despite leaving Hanoi two hours late, we arrived at Hue roughly on schedule. The other backpackers were in the same boat – er, bus – as me in that they did not know where they would stay or what there was to do in Hue. We shared a taxi at 50 cents a person to get over to the backpacker part of town, where I have remained since.

Man, when I got off that bouncing machine this morning I was badly in need of a shower and an aspirin. The aspirin I got to later this afternoon, the shower is still forthcoming. It actually just started to rain while I am typing, so maybe I will get a double shower tonight. But it is so hot here! It is actually probably the same weather as in Florida, though ice and air conditioning are harder to come by. I dragged myself to see the Imperial City here in Hue, which seems like one of the few things to do in the city. The Imperial City is only a couple hundred years old and suffered heavy damage in the American War. Today, it is not that impressive. There are no maps and no placards to guide the visitor. Needless to say, my visit was short.

Walking back to backpacker central I saw some old war pins for sale on a ledge by the road. I was inspecting them when the seller announced “American!” Is it that obvious? We got to talking, and it turns out he is good at determining what nationality people are. He was accompanied by a retired history teacher, Don, hailing from Los Angeles. Don gave me a dose of enthusiasm for and history about Vietnam, which boosted my mood considerably. The lesson for today? If you are feeling down, pick your head up and learn something! We chatted for at least an hour, after which I bought a commemorative Communist victory pin from 1972. Lop, the seller, has pins like these as well as official’s pins, dog tags (Don’s specialty – he buys them by the thousands and brings them back to the States to do research), coins, and a whole host of other objects found in the jungles and junk drawers of Vietnam. This encounter was a pleasant surprise.

Another way to boost one’s mood is with food. As my Uncle Dave Fitz always says if you don’t feel good then think about when the last time you ate was. (Or something to that effect.) I am trying to stay hydrated (kind of hard when the water on hand is warm if not hot) and fed. It is easy enough to be a vegetarian in Vietnam. My diet here is pretty much rice accompanied by tofu and/or vegetables stir-fried in some sort of oily sauce. Condiments include soy sauce, spicy sauce, and tomato sauce. There is fresh fruit, but the trouble is just finding it. Usually it is sold by ladies wearing straw hats carrying their wares over their shoulders. Fruit was easier to find in the larger city of Hanoi.

At this very moment I am at Le’s Garden Bar in Hue and there is a regular monsoon a-brewin’. I came here for a post-dinner smoothie with the intention of working on my on-the-road scrapbook, which I did with a rather large audience of resident waitresses. They have two free computers (a nice thing about much of Asia (that I have seen anyway) is that free Internet can be found at many hostels and restaurants for paying customers), one of which I am making use of while the storm rages on. Just one mississippi between lightning and thunder = the storm is right over us! My oh my that breeze feels good. Those raindrops can keep on falling!