No, I did not make that up. I saw it on a t-shirt and thought it was funny and appropriate, given my activities at Angkor Wat yesterday. I woke up at 4:30 (really I woke up at 3:30, when some dorm mates finally stumbled their way home) to catch the sunrise. Two girls from Northern Ireland, Maria and Karen, shared a tuk tuk with me. We made it for the sunrise and did a full day of exploring.

Angkor Wat is actually just one temple complex. There are hundreds, some grander and in better shape than others, scattered around the area. It is possible to reach many of them by bicycle, but the farther-out ones require a tuk tuk for the day. Since I only bought a one-day pass, I opted to do the small circle that had the most notable temples along its route, including Angkor Wat and the temple where Tomb Raiders was supposedly filmed.

The day before, I picked up four copper painted Buddhas at the market at five bucks a head and toted them around with me, taking pictures of them at the temples. The one sitting in lotus position is for my host sister, May, who was born on a Thursday. The one standing with his hands over each other is for my host brother, Mackey, who was born on a Sunday. My friend and Yaso sister, Anouk, was born on a Sunday as well and she has a matching Buddha. I was born on a Monday and got a Buddha standing with one palm facing out for myself (the first and only trinkety souvenir I am buying on this trip. He will keep my wooden Buddha company perched at the top of my AVID speakers when I get back to Tampa). In Thai culture, each day of the week is associated with a certain Buddha and a color, among other things.

To find out what your Buddha is, type in your birthday to this calculator http://www.mathsisfun.com/games/dayofweek.html and then look at this page to see your Buddha http://www.phuket101.net/2012/03/buddha-positions-for-seven-days-of-week.html. Each posture represents a different part of the Buddha’s life and corresponds to a color for the day. People that like horoscopes will like this.

And now, on to the pictures! Most of them will have on of the Buddhas in them, but some are just of the temples and I may make a few appearances as well.

Oh my Buddha, it’s the sunrise! Angkor Wat is silhouetted in the background.

First wai of the morning at Angkor Wat. (The Wai is a distinct Thai thing that is not so common on this side of the border.) 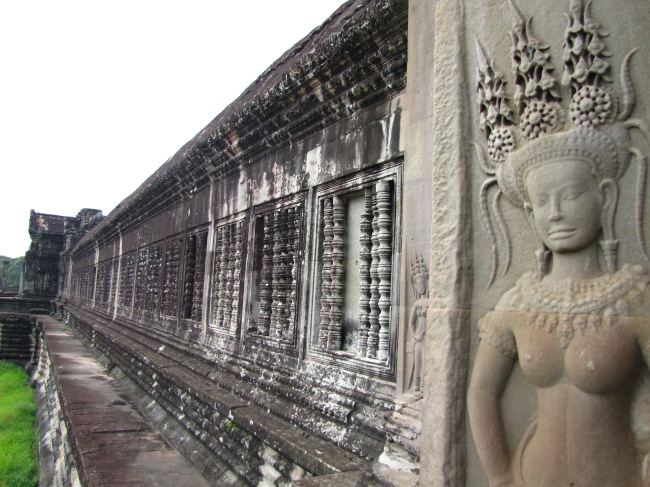 This beautiful lady is a dancer called an Apsara. She obviously recently had some plastic surgery, or plaster surgery as the case may be. Apsara motifs are very popular all over Cambodia. 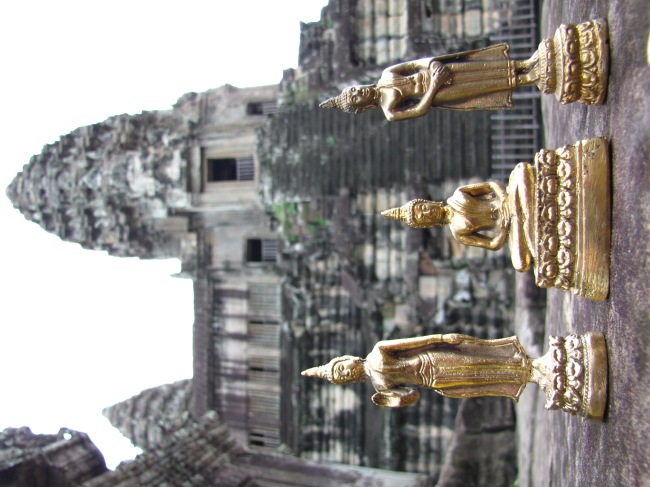 The one above is my favorite from the whole day and I don’t know why it won’t rotate.

There are few roped-off sections of the temples, meaning that visitors can climb and lounge pretty much wherever they please on these ancient monuments, including this one, the most famous Angkor Wat. Not the best strategy for preservation, but I must admit that it is more fun to be a part of the problem in this case. You would never get away with that kind of stuff in the States. Not that we have thousand-year-old temples, but you know what I mean. 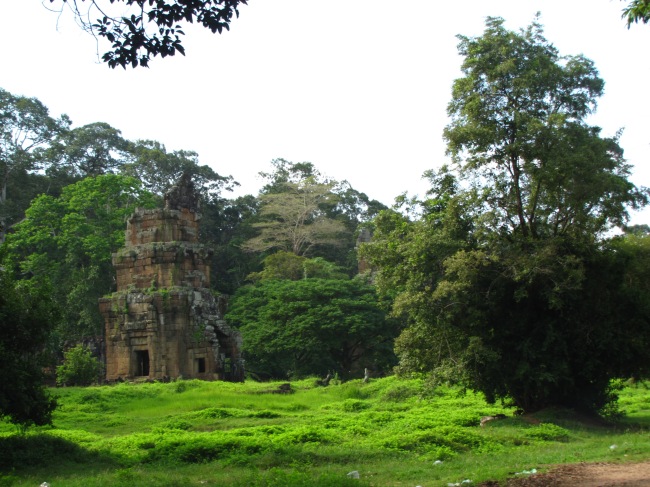 Ruins in the impossibly green foliage. It is the rainy season now, making trees (where there are trees) fresh and green. 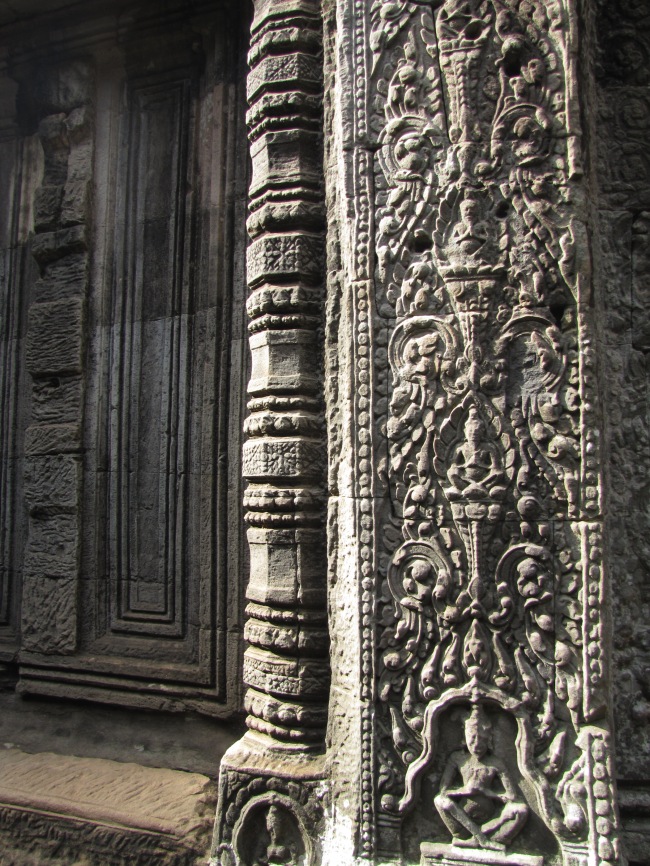 Through this window, you can see the enigmatic, smiling faces of Bayon. This is at a different temple, and these large faces adorn large pillars, facing all four directions.

If the faces of Bayon had larger nostrils, you better believe that one of them would have had a golden Buddha boogey lodged up there.

Bayon is in the background. Look closely and you can see faces in the ruins. 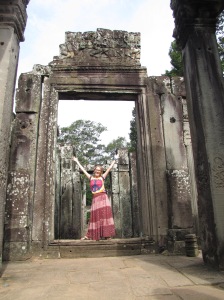 Now that is one mighty large doorway. 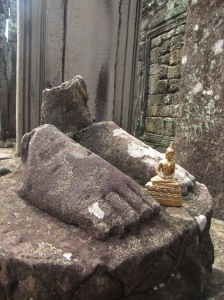 I’m trying to think of something gong-worthy for this caption:
Who could toe the line with this guy around?
If I were a statue, that would be my [toe] jam!
Blown away by Buddha.
Any other ideas?

Nice frontal focus with the gateway to some other temple in the background. The long, elevated, stone walk to this temple over a long stretch of bog was impressive in its own right.

The stair structures built to get up and down some of the temples could be a little tricky to navigate. Steep with impossibly narrow boards; just take one step at a time and be thankful they weren’t slippery to boot.

Goofing around. If I had a willing photographer it would have been crazier, but the timer on my camera only allows ten seconds to get in position…

…Still, that’s enough time to strike a glamour pose among the tree-infested ruins of the “Tomb Raider” temple.

And again. This time it seems more literal since he is perched atop a headless statue, though the body may be hard to make out in this picture. 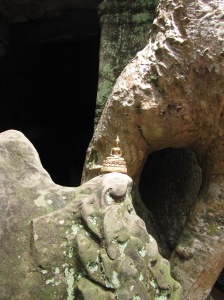 Buddha with the power of wood triumphing over stone.

Finally, a whole wall of Buddhas! I thought of the song “Miss New Booty” but replaced “booty” with “Buddha” in my head. A quick YouTube search revealed that this was not an original association. I would post a link here, but the computer is dreadfully slow. YouTube “buddha buddha buddha rocking everywhere” if you want some cheesy, amateur videos.

Well! Those are some pictures to highlight yesterday’s trip to Angkor Wat. Today was election day as well as a Sunday, so things were pretty quiet here. Lots of shops closed, especially because people have to go to their home provinces to vote. I caught some of the results on a projector screen on Pub Street this evening. It looks like the Rescue Party was in the lead. Each time a new commune’s results were announced and the Rescue Party was the majority, all the waitstaff cheered and shook hands and high-fived. It was really exciting to see and reminded me of standing in Grant Park five years ago, watching the polls with thousands of anxious Chicagoans. I’ll never forget the jubilation (and throwing up in my dad’s office toilet; I have refused to eat Jimmy Johns since) of that night. This election has a lot at stake for Cambodia, and I will be interested in watching the news unfold over the coming weeks.

At the moment, I am at my hostel, waiting for a 2 a.m. bus to take me to Bangkok. Still three hours away… I have time to read and doze, like I have been doing all day. Ah, the glamorous life of a traveler. Siem Reap is a nice place to chill (and be sick, since it is so tourist-oriented and is pretty small) but I am pretty much chilled out and am happy to be moving on. Thailand glitters ahead of me, and beyond that India is starting to scratch itself into my thoughts more urgently. I still think I want to volunteer with some munchkins, but since I will be arriving a few days before the fifteenth at the latest it is also possible to do a yoga retreat at the same place with which I have been in contact. I’m going to sleep on it for another week and see what beckons.

3 thoughts on “Buddha is my Om boy”