It is the end of my second weekend at Oxford and I have been rather busy. Nothing serious (yet) and it has been nice to enjoy the days guilt-free. Okay well I do have a reading list already, so there was a little guilt but not much. Everything will be taken care of in due time.

Before I carry on with what I have been up to (including pictures! Thanks for sending everything over, mom. You da best.) I would like to explain the Oxford system a little bit. Here there are no classes, per se. Instead they follow the tutorial system, which is unique to Oxford and Cambridge, another venerable institution. Cambridge is not too far by car and the two are often referred to as “Oxbridge.” But back to the system: in a tutorial, the professor (called a don, though I have yet to use that term in daily conversation) and the student work one-on-one, though sometimes there may be two students in a tutorial. Professor and student arrange their own meeting schedule. Term is only eight weeks long, so a major subject will require eight meetings while a minor subject requires four meetings. Since this is on a very personal level, tutors are very willing to work with their student’s schedule. It is generally recommended that minor tutorial meetings happen every other week, but some students may request to front or back-load their schedule depending on other commitments. It is a pretty relaxed but tried-and-true approach to pedagogy.

In the tutorial, the student’s essay for the week (usually between ten and twenty thousand words) is read and discussed. The tutor will try to question the student’s arguments and provoke further thought and discussion (in a friendly manner, one would hope). Tutorials are meant to last between sixty and ninety minutes. Some or all essays may receive comments, depending on the tutor. There are no tests and no grades. Instead, at the end of term the tutor will take into account the quality of all of the essays as well as the student’s verbal composure during the discussions. Due to the personal nature of the tutorial it should be very easy to find out how one is doing along the way. I have been assured that I will have a good idea of where I stand as I go along. 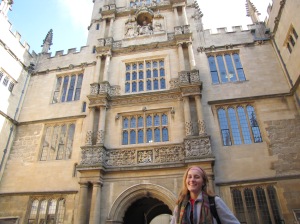 My first tutorial(s) will take place during First Week, which begins Monday the fourteenth of October. This upcoming week is Zero/Noughth Week, which is when all of the rest of the Oxford students will arrive. There will be lots of activities/inductions, including the Fresher’s Fair on Thursday and induction into the Bodleian (above) on Monday. Dining halls opened today, so I can go dine like Harry Potter now! It will be an avenue for meeting other Christ Church students.

So, tutorials have yet to begin and my commitments with OSAP are pretty minimal. What have I been up to? For one, I have been taking advantage of the Cavatina scheme and went to see another concert of gypsy music. The amazing piano duo played again, plus a comedic Norwegian on the accordion played quite a few numbers. I always say that if I could play any instrument it would be the accordion. I think I stand by my previous statements. He was awesome.

Guac night was a hit! Below is a picture of my flatmates in the process of mashing before the party. (Deeya on the left, Vanesa on the right.) Judson (our flatmate who works for OSAP) lit candles and I made nametags for the game where you have a name on your back and have to guess who it is. (Judson gave me Daniel Boone, which was probably the hardest name out there. Then again, I gave him his own name so we are even.) It was a great conversation starter and let me keep track of how many people came. At one point we had around forty people at our house. Success! Next time it will be wine and cheese night.

Guac night was Thursday and Friday was free save for a ten-minute academic advising meeting. I visited two museums and two parks. Museums are almost all free, meaning locals can really take their time and come back again and again to really soak it in. That is great news for me since  the museums have so much in them. Pitt Rivers, with a fantastic anthropological collection from around the world, demands that I come back again. I spent a couple hours wandering through the densely packed cases and marveling over the eclectic collections. Each case had a theme, from Inuit snow-wear to treatment of dead enemies (including a variety of shrunken heads!) to zithers. It was a cool place and I will definitely be back. The other museum was the Museum of Oxford, which is just a couple of rooms in the Town Hall detailing the history of Oxford the town. There was a neat interactive tour of the area, from which I learned that James Murray, the editor of the Oxford English Dictionary, lived and worked only a couple blocks from my house. Also JRR Tolkien’s grave is a short bike ride away. The density of significant people and places is just stunning on this little island.

In Oxford’s parks no bicycles are allowed, so I had to explore on foot. First I ventured to Oxford University Parks. Below is one of a handful of swans I saw near the stream on the border. I don’t think people feed them here, which was a relief because it didn’t get nasty when I failed to offer food.

I also did a lap around Christ Church meadow. Cows were grazing inside the meadow, and it was easy to feel like I had somehow been transported to the countryside. But once glance across the meadow and there the “dreaming spires of Oxford” were, ensuring me that I hadn’t strayed that far.

Every day I try to walk a new way or otherwise explore a new place. The weather has been nice, unseasonably warm and sunny or so I am told. No complaints here! Some of the trees are starting to turn but the grass is still soft and green and flowers are in bloom. This picture below hardly does the gardens at Christ Church justice but you get the idea. It is beautiful and it is my place for the term! What a lovely prospect.

Every day I try to do something new, whether that be walking a new way, going in a new store, or trying a new cider at a new pub. Speaking of which, my standard question to generate conversation with other OSAP (Oxford Study Abroad Programme) people is “What is something you want to do before you leave?” This can yield some interesting insights into people’s goals and personalities. And, naturally, the question has been turned on me almost every time too. There are a lot of things I want to do before I go, like thoroughly visit all the local museums, go to Tolkien’s grave, attend Guy Fawkes Day festivities, go to a formal dinner party, things like that. But what I usually say is try out all of the pubs in town. Thus far I am doing pretty good! Cider is proving to be a happy alternative to beer. Pints cost between two pounds and four pounds fifty pence, depending on the place. It is a jolly good time, it is!

Yesterday was a particularly jolly time. I went with three OSAP guys who have bikes to explore a place north of Oxford called Wytham Woods. The ride was beautiful and so were the woods! There is a regular thoroughfare on the dirt path next to the river. People on bikes and foot wander next to the banks, walking dogs and fishing and chatting and weaving around the occasional cow. On both sides there is greenery and open space. Below is a picture from today’s ride.

Plus the weather was nice enough for a t-shirt and the bikes were riding fine. It was a great day, made better by stumbling upon an ale festival with two pound pints. Best of all, it was advertised as being “in our Bedouin tent” at the Perch Inn. On the way back we locked our bikes and followed a short path through some trees and came upon the place. It did not disappoint.

We also happened to be just in time for a short talk given by a local brewery owner, pictured in the Bedouin tent below. He talked about the brewing process and had hops and various types of barley for sniffing and sampling, respectively. It made me want to visit and see for myself, though I was content with chatting to him afterward. I learned quite a bit about beer, including the necessity to mind your terminology. I asked if he brewed cider, to which he replied “Beer and tea are brewed. Beer, cider, and wine are fermented.” This guy actually has a master’s degree in brewing (I am sure it has a fancier name that I just can’t remember right now) that he got in Scotland. You really can get a degree in anything. 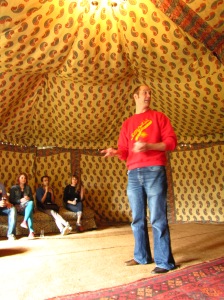 Today I was back on the pretty river trail with a number of other people. The Wolvercote (a small town north of Oxford) community orchard was our destination as they were celebrating Apple Day. We went to see the orchard the previous day en route to Wytham Woods, where we encountered yet another charming English sign: 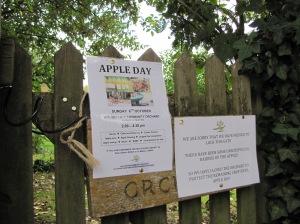 Notice how the sign on the right reads “We are sorry that we have needed to lock this gate. There have been some unscrupulous raiders of the apples so we have closed to orchard to protect the remaining crop until Apple Day.” Unscrupulous raiders of the apples? You would never see that on a sign in the States, at least not in earnest. There are a number of quint/quirky signs like that scattered around here that remind me that I am not in America.

Apple Day itself was a hit. There was apple bobbing, apple picking, apple juicing, apple peeling (a masterful peel is being measured below), apple tasting, apple (and other fruit) jam, apple desserts. I had something called an apple flapjack that had lots of butter and sugar and some nummy crumbly bits and, of course, apples. It was so good I had two plus a couple of other savories. They were so cheap! And they went fast.

Another highlight was the band that wove through the orchard, tooting and grooving. The lady in the foreground of this picture was like a glimpse into my future: crazy hat, colorful clothes, first to dance. I joined her and was then joined by some OSAP people. Crazy Americans and the local eccentric: what a memorable Apple Day. At least people didn’t start hiding their kids when they saw us coming.

Well that’s about enough for now. Tomorrow is sure to bring some more adventure. But first I will leave you with a picture taken on a local street the other day. Some filming was in progress, though it is not clear whether this pair was involved or just happened to be another set of eccentrics. I would not be surprised either way. 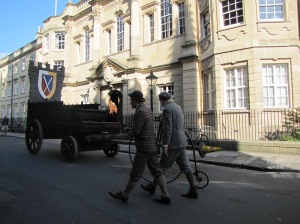 3 thoughts on “Another Sunday Evening”