Once again I am typing this post in a Word document while on the go. This time I am on the second story of a tour bus, fourth seat from the front on the lefthand side. We are just heading out of Oxford proper and once again I am surprised at how quickly buildings give way to trees and fields. In the States, suburbia sprawls for a seemingly endless distance. Towns are separated not by streams and fields but by housing developments and strip malls. But here it seems that once you are on the highway out of town you are well and truly getting out of town and into the countryside.

So here I am, flying along a few meters above the ground, watching the still-green countryside blur by in my periphery. Our first destination — and by we, us, and our I mean other OSAP students and myself — will be Bath, followed by Stonehenge. The Oxford Study Abroad Programme offers four trips for us throughout term. The first of which went to London and the remaining two will take us to Cambridge and Windsor Castle in the coming weeks. Might as well see what one can while one is here, right?

And as I have mentioned before there is no shortage of things to do or see here! This was another week full of happenings, and next week promises the same besides the fact that it is Halloween. And yet I still find myself settling into a routine of sorts amid a packed schedule. An average day may look something like this:

1500 Back to library to continue reading.

1900 Go to a pub to write. (Postcards, reflections on the day’s reading, to-do lists, blog ideas)

2000 Attend an event such as a lecture, open mic, concert, club meeting, etc.

That’s the idea, anyway. Many hours each day are devoted to reading and, when the time comes, writing essays. It is rather intense and is definitely a system for self-motivated and independent learners. That said, I am finding myself quite happy here. Term has begun in earnest and I couldn’t be more pleased with being here to study ethnomusicology. This week’s essay, as I may have mentioned in a previous post, is about why North Indian classical music is popular beyond its national boundaries. Only one book was assigned for reading and for the rest I have been left to my own devices. As a result, I have been having fun exploring this topic on my own. Some avenues of doing this have included watching the BBC documentary about Ravi Shankar, listening to music from masters like Nikhil Banerjee and Ustad Vilayat Khan (I did this partially while sitting in the Duke Humphrey’s reading room, which is a particularly splendid place in the Bodleian. It was almost surreal to create this personal soundscape while sitting in such a beautiful and venerable room), watching Hindustani (North Indian) vocal lessons on YouTube and attending a class in person (I gave it a try but for the most part deferred and let the other student with more experience have a chance to practice), reading about the Beatles, sketching the different instruments and noting their characteristics, reading Afternoon Raag, a novel set in Oxford and India with music as its main connective tissue, and so on. As another student put it: you have to wallow in the subject. I’m wallowing all right, but now the time has come to create. The essay is due tomorrow and my plan is to get in the groove tonight and try to finish it. Fingers crossed that works.

And now time for some of the highlights and happenings since the last post was written. For the first: I went to London on Wednesday night for a concert. The band was MadinaLake, a group from Chicago that formed the soundtrack for my early teenage years. Going all the way to London to see a band from home is kind of a funny thing to do but it was great to see them in a different context with a different crowd. Besides, London was the last stop on a farewell tour of the UK, so it was perhaps the last chance I had to see them. And the concert was fantastic! Lots of love between the fans. Between songs people were only able to clap because they had been singing along, followed by a silence in which the band addressed the audience and the audience had a chance to speak to the band and pass forward letters and homemade banners of their fandom. Crowdsurfing was a regular occurrence and next time I really must remember to wear contacts as my glasses were nearly broken a number of times. I also got kicked in the head by a flailing foot, resulting in a bump under which a pound coin would fit quite nicely. In the future I should take batter care of my investment (i.e. my brain; improving this asset is what I am here for after all) but it was a great show, bump or no.

The following evening (Thursday) my primary tutor, Noel Lobley, organized a lecture titled “Listening to the Aesthetics of Popular Culture.” The lecture was given by Chicago-origin University of Montreal Bob White on the subject of Congolese dance music. My hope was for some dancing demonstration, but no dice. Nonetheless, it was an engaging lecture made all the more interesting by the visit to the pub afterward. We (the speaker, my tutor, other members of the audience, and myself) went to the pub The Eagle and Child, which is famous for its role as the meeting place of the Inklings. The Inklings were a group of writers based in Oxford that included names such as C.S. Lewis, J.R.R. Tolkien, and the like. That evening it was full of talk about music and anthropology and was a quintessential Oxford experience in my opinion. That kind of event is why I like this place so much and is what I will miss back in the States.

Speaking of tutors, I had the first of four primary tutorials on immigration yesterday. The meeting went well and I have a lot of constructive criticism on my essay, which is exactly what I need. I told her that I am planning on going to grad school and would like to be pushed, which she is willing to do. Overall we are off to a good start, I think. Hopefully I will do better with the next essay about involuntary migration.

I get all kinds of emails from the university and various clubs about things that are going on and I try to do as much as possible. Yesterday (Friday) after my tutorial, I followed up with an email I received and took part in an experimental psychology study on hypnosis. It was a situation of killing two birds with one stone as I was both able to experience hypnosis and take part in a study. The hypnosis itself was underwhelming, really. Especially since I have seen some crazy stage hypnosis and admittedly had that in mind when I signed up. But in reality this hypnosis focused on getting participants to relax and then seeing how responsive they are to suggestion. Afterward there is a survey to reflect on how much control you felt like you had over your actions. Hypnosis is entirely in the mind, so your expectations and willingness to be hypnotized play a huge role in your experience. For me, I was somewhat resistant but willing to go along with it. At least I am not worried about being an easy victim for villainous hypnotists out there.

Looking forward (besides to the rest of today, of course) there are things like an orchestra concert tomorrow morning (I claimed a free ticket for being a music student. Yeah!), an extra hour for essay-writing gained when the clock falls back to Greenwich Mean Time. Halloween is sure to bring some sort of hijinks around here on Thursday and the Vice President of India will be coming to give a talk on Friday. I have a confirmed place for the latter event, which is quite the opportunity.

And now we are approaching Bath — I will post this upon returning home this evening.

Home now; safe, sound, fed, and warm. After seeing the Roman baths at Bath I wish they were still operational. Now I am inspired to utilize the bathtub and hot water tap in my own house. Maybe that can be something to look forward to after finishing the essay I will be birthing tonight. Stonehenge was another wonder. A busy road has been built practically right next to it so the ancient silence around the place is more or less broken but there is still a bit of an air of mystery blowing in on the winds. Below are a few pictures from recent times.

During a study break I wandered into Magdalen (pronounced like maudlin) College and wondered at the beautiful buildings and grounds there. The entire quad was filled with brilliantly green grass and these hydrangeas along the border. Truly lovely. 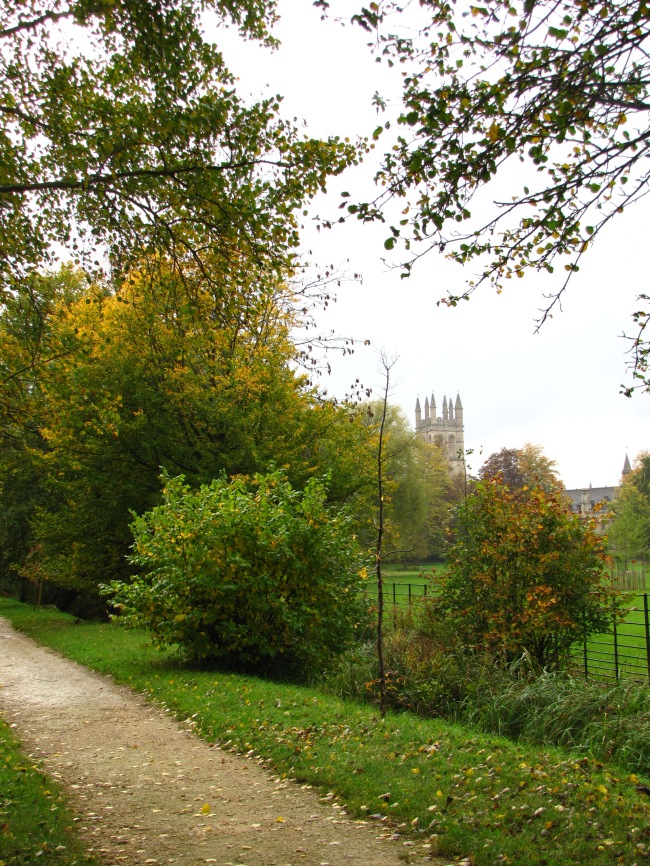 Magdalen College has its own deer park. I took a turn about it and am constantly charmed by the bits of roofline that reach above the trees.

And then of course there were the deer. The buck rallied his herd with grunts and other calls. Also notice the beautiful tree. Fall colors are getting into swing here!

One thing to like about Oxford is that there is always something going on, including filming. This was not the first time I stumbled upon a crew taking advantage of the picturesque alleys and corners. Not sure what they were filming but it was a nice distraction before a long morning in the library.

Last night at the Ashmolean this two-thousand year old statue got in on the party.

This one was not taken in Oxford but there are some parallels to the previous picture.

The abbey in Bath. A memorial service of some sort was going on, hence the flags. 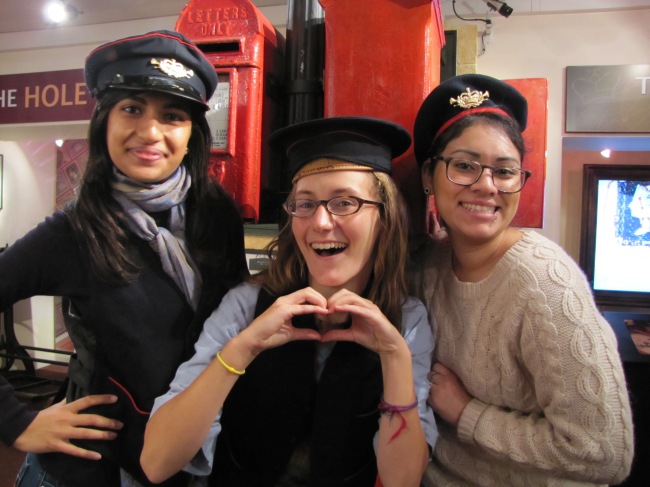 We had a solid hour of free time in bath before going into the baths themselves. A few of us went to the postal museum and amused ourselves with some costumes. My flatmates Deeya (left) and Vanesa (right) joined in the fun.

And Obama even made an appearance! He was waiting in line for a scone before going to a meeting but graciously paused to take this photograph. Thanks, man.

A mosaic pig found behind the abbey in Bath.

And the main bath in the complex! The water is no longer treated and you are therefore advised not to touch it. But it is still heated by natural springs, just like when the Romans were here.