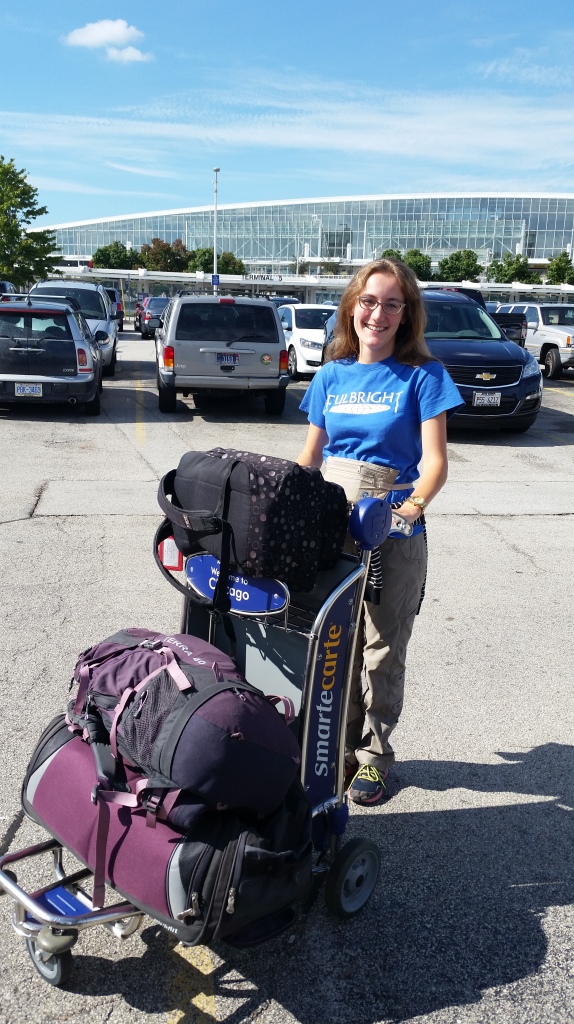 So it has come to this: I am back in O’Hare’s Terminal K, sitting in the food court. Bags are packed, the plane is on time, and the Next Adventure is officially underway. Things are going well, except a singular thought consumes my mind:

This line plays on a loop in my brain. I am taking my shoes off at the security check-in and

Walking to Gate K-19, I pass a confused couple contemplating the Departures board and I hear

Washing my hands in the restroom, I catch a whiff of strong BO and as I reach for the paper towels I think

Sitting down to write the first new post on https://whereintheworldiskelly.com, I want to be clever but all I can manage is

Thanks a lot, Dad. We have barely parted and you have given me a bad case of ear worm-itis* to keep me company on the long trip ahead.

After singing those 13 words to myself an estimated 14,562 times, I should arrive in Jakarta shortly after midnight on August 9th. In total, travel time is a little over 24 hours. This isn’t too bad when compared to the circuitous journey to Indonesia last year: Chicago-Minneapolis-Tokyo-Singapore-Jakarta. This year’s itinerary is Chicago-Tokyo-Jakarta. Much better.

BUT WAIT! Why am I flying to Jakarta? Didn’t I just come from there?

Long story short: I am returning to Indonesia for a second Fulbright grant, this time as a Senior English Teaching Assistant (SETA).** This is the same program, but a slightly different job title. Part of the job entails that I–along with the lovely Miss Mackenzie and Miss Sam, the SETA Dream Team–return to Indonesia two weeks in advance of the incoming ETAs. We will stay in Jakarta to plan for orientation and do whatever needs doing in the AMINEF office. It’ll be a good time with good people, and over the course of two weeks I might even see more of the capital city than the Grand Indonesia Mall.

Once the new ETAs arrive on August 24th, we’ll spend a night in Jakarta together to allow everyone time to arrive as well as do a security briefing (don’t drink the tap water, err on the side of conservative dress, have fun, etc.) before sending everyone to their sites on the following day. This is when the adventure really begins: when you step off the plane in a new city and a crowd of people you’ve never met are waiting with wide smiles and hearts full of expectation. These people speak rapidly in a language you don’t understand, and they take you to eat too much food before dropping you off at the dwelling that you’ll call home for the next nine months. Yes, this is a pivotal moment in the adventure and one I await with nervousness and optimism.

But for the moment, life hums around me in Terminal K. The Starbucks baristas clunk ice into cups bound for far away: served in Chicago but discarded in Oslo. Kids run through the tables, harried parents trailing behind and calling out in a language no one else in the room can understand. The cleaning lady spritzes a table and wipes it vigorously for the third time since I sat down. Life hums around me, and I hum back

* In German, an “ear worm” is a song that gets stuck in your head. I can’t recall the German word for it now but I like this concept.

** The Fulbright Program offers grants for English Teaching Assistants (ETAs) in many countries. These grants cover the cost of travel and provide a generous stipend while in-country. ETAs work with local teachers in high schools and/or higher education around the world. The Fulbright Program in Indonesia is administered by the American Indonesian Exchange Foundation (AMINEF) and ETAs work exclusively with high schools. Each year, AMINEF offers several ETAs the opportunity to return for a second year to teach in a different community and serve as peer leaders (hence the “Senior” part of the title) in the following year’s cohort. Thus I was an ETA for 2015-16 and I will be a SETA for 2016-17. As far as I know, Indonesia is the only Fulbright program that offers a second year to ETAs.