Several weeks ago I went to Universitas Airlangga’s American Corner (AmCor) for the first time. I arrived “fashionably late” (traffic took two hours instead of the expected one) but I still made it! Before I had the chance to introduce myself to everyone, Mas Agung, AmCor’s coordinator, informed me that they were planning on having an intercultural cooking class with me.

Thus party planning began, which culminated in an estimated 67 people cramming into every corner of my house last Saturday for an Amer-indo-talian luncheon.

Me, the hostess with mostest! 😉

Krupa, my sitemate, who slept over on Friday night so that we could get cooking early in the morning on the Big Day.

Shreya and Caroline, fellow ETAs, who went above and beyond to come up from Malang (a city over two hours away by train) for the day.

Mas Agung, who can take full credit for the idea and who bought most of the food supplies.

About 12 of our friends from AmCor who are all students in various faculties at Universitas Airlangga. They were the first to come, the last to leave, and the only reason we were able to feed everyone.

Mbak Sari, my neighbor who is in college studying to become an English teacher. She was the real rock star by supplying all the pots/platters/plates from her house when we realized (too late) that we needed more than what I had at my house.

6 teachers from SMA Wachid Hasyim, who brought their best attitudes, big appetites, cakes to share, and added sparkle to our party.

Around 43 of my English Club students who came despite the rain and brought enough Papaya-flavored drink and cups for everyone.

This potluck was a resounding success thanks to all the people who came and helped with the shopping, the chopping, the cooking, and the cleaning. It was quite the intercultural event! Foods like deviled eggs and bruschetta were completely foreign to our Indonesian friends while we learned a few things about hosting parties Indo-style. No chairs, plates, napkins, or silverware? No problem! I had borrowed rugs from my school in advance to cover almost all the open floor space. People sat on the ground, which is the norm for eating in large groups in Indonesia.

And when the squad of 40+ students rolled up to the house we quickly realized we didn’t have enough plates or silverware for everyone. Someone from AmCor had the genius idea to have everyone use brown waxy paper that is usually used for wrapping fried food/rice to-go, which saved us until Sari showed up with paper plates for everyone that she got from her house. Thankfully no silverware was no problem. It is de rigueur for people to eat with their hands so my lack of foresight didn’t have the detrimental effect on the party that it would have had in the U.S. As for no napkins: I’m sure they would have been appreciated but no one said anything.

While the main focus of the party was the food, we also got the students up and moving with dance that every American knows: the Cha Cha Slide. The rain stopped just as we finished eating and took our party to the streets with our flash dance rendition of an American staple. It was a blast to teach the kids to Charlie Brown, cha cha, criss-cross, get low, and bring it to the top right there in the street to the beat blasted from my portable speaker.

Overall the party was a lot of fun. I feel grateful to have found such fun people so quickly and I can’t wait for our next get-together! Thanksgiving get-together, anyone? 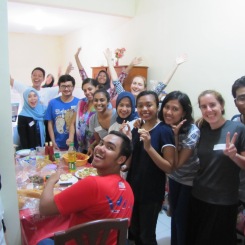 What a great crew of people! My kitchen/house feels empty without you all. 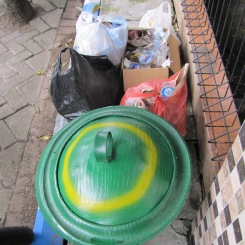 The aftermath… Not to bad, eh?

The students striking a post-Cha Cha Slide pose. No, I don’t know what the arms in the air mean. 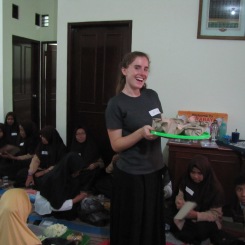 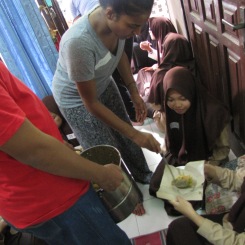 Shreya serving up some delicious and fresh gado-gado.

Krupa and Mas Agung in the quiet before the storm. 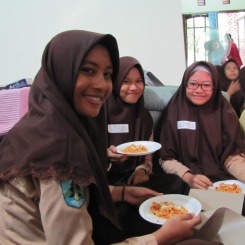 I’ll do anything to see my siswa [students] smile. 🙂 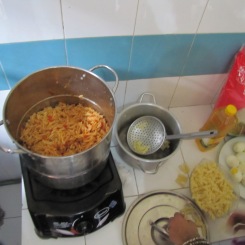 A big pot o’pasta! The Italian grandmother I never had would have been proud. 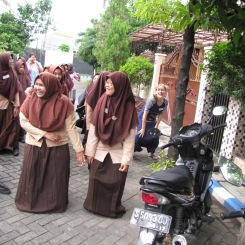 Gettin’ funky with the Cha Cha Slide. I look like I’m having a great time.

2 thoughts on “Pasta, Pesto, and Peanut Sauce: An Intercultural Potluck”