The road was suspiciously empty. Sam and I had been driving for nearly an hour trying to find the museum in New Bagan. We pulled over, our turn signals letting out a shrill cry to alert the dusty road of our intentions.

“Dude, this doesn’t seem right,” I said. We looked up and down the road. The small shops and cafes that dotted the roadside earlier had disappeared. Now there were only trees and grooved asphalt ahead and behind.

“Should we ask someone?” Sam suggested. We had passed a petrol stop where you get gas from glass bottles a little ways back. We wheeled our e-bikes around and went back the way we came. We passed the young guys playing billiards under a tarp and rolled to a stop at the little shop next door. A pick-up truck with benches and a roof over the back was also parked at the stall. The riders looked at us curiously. We got out our Burmese notebook and gave it a try: “Bae malae New Bagan?” Where is New Bagan? The guy behind the glass bottles pointed in the direction we were now heading. We had been going the wrong way the whole time!

“Chey zu pah!” Thank you! Sam and I smiled and the attendant smiled back. We were on our way again, taking in the gorgeous blue skies above and the fields full of temples all around us. When we got to an intersection we stopped to consult the map and decided to take a roundabout way to get to New Bagan. We turned off the paved road and took to the dirt and gravel, our e-bikes straining over the terrain.

We hadn’t gone more than 200 meters along the new road when two little boys followed us on their bikes, making motions at us. We stopped and one of them pointed at the cameras around our necks. He made a motion as if he was taking a photo then posed. We agreed that it seemed he wanted us to take a photo, so we did. Isn’t he cute?

At that moment a man came out of one of the houses and introduced himself. He had excellent English and invited us into his home for tea. We accepted and took the opportunity to expand our Burmese vocabulary. The man was patient; Aung Go Latt is his name. Turns out he is an artist and his gallery was damaged in an earthquake a few months ago. We agreed to look at his paintings and then (naturally) bought one each. Was this a pre-meditated sales pitch? Perhaps, though it didn’t feel that way. After we bought our paintings he insisted on showing us around his area, pointing out the temples that are the inspiration for his work. He took us to the riverside (a spot to which we would return later that evening) and then to the top of another temple where we had a glorious view and learned to say important things in Burmese like

At one point one of Aung’s friends called him and he handed us the phone to practice our new words. His friend laughed too hard to respond… Not that we would have known what his friend was saying anyway.

When we parted for the afternoon Aung offered to have a party for us with some of his friends that evening. We’ll have food and beer and candles and music, he said. And so it was that Sam and I met him again at 8 p.m., our adventurous selves getting the best of us. We met him and one of his friends at an intersection and followed them to the same spot by the river that we saw that afternoon. The moon had not risen yet and there were only a few lights along the riverbank. Some of his friends were waiting at the spot. They had a pack of candles and were lighting them all along the base of a thousand-year-old pagoda by the river. It was all terribly romantic. We tucked into the all-veg dinner and accepted beer from the case that they had brought. It felt like we were in college again, having a late-night picnic with some of our friends. One of them even had a guitar and the whole crew was singing their hearts out in Burmese. We sat and chatted and ate and drank, laughing often.

Once the candles had burned down they suggested we move along. They were going to drink more beer at their friend’s tattoo shop, would we like to join them? Of course we would! And so it happened that Sam and I spent the rest of the night learning more Burmese and making still more friends in Bagan Poem Tattoo Shop.

And that is only Day One in Bagan! Myanmar has been wonderful to us thus far and I couldn’t have asked for a better person to travel with. Currently it is late morning on Day 2 in Bagan. Sam and I are going to try again to find the museum and see some more pagodas, which is what makes this area so famous. Who knows what other adventures are in store for us today? 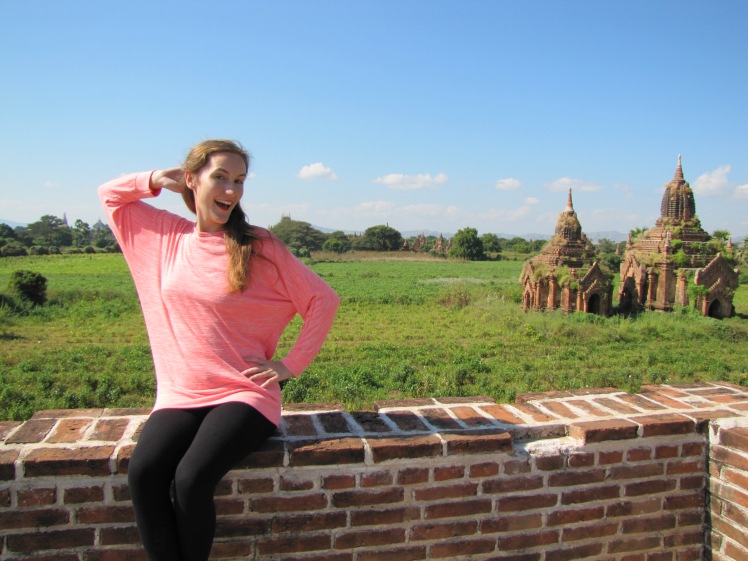 7 thoughts on ““Ning koh lar?”: Living like a local in Bagan”