The word magnificent is created for describing places such as Bagan. Once a UNESCO World Heritage site, Bagan is a small town remarkable for the number of temples dotting the plains of what used to be a thriving civilization. Temples, pagodas, stupas, and any number of other Buddhist relics are scattered across the fields of Bagan by the hundreds. Many were built in the twelfth and thirteenth centuries. Today, each structure is in various states of restoration. Earthquakes are common in Myanmar and centuries of neglect have taken their toll on the man-made parts of the landscape. Even so, the people of Myanmar have done a fantastic job at restoring these structures and making them accessible to tourists.

Temple-hunting was the primary reason that Sam (a fellow second-year ETA) and I chose Bagan as our second destination in our week-long trip together. Our first few days we spent in Yangon, where we hit the ground running after she arrived the morning of December 19th. We saw the National Museum, Shwedagon Pagoda, and Karaweik Palace our first day and gave ourselves a walking tour of the city on our second. Our adventures there deserve their own post but for now (and for the sake of me getting to bed at a reasonable hour) let me focus on Bagan.

Our first day in Bagan is detailed in my previous post. We didn’t see too much, but we did get lost and ended up having a great time that couldn’t have been planned better. The following days we had more of a strategy, which allowed us to see the Golden Palace, Archaeological Museum, LOTS of temples, and even brought us back to the Bagan Poem tattoo shop for more beer and quality time with our new friends. One of our friends is named Quality (hence the title of this post) and it turns out he is a tour guide, among other things. Last night–in between eating traditional tea leaf salad and getting Sharpie tattoos from a professional artist–we got his recommendations for the best temples to visit. Today we followed Quality’s recommendations exactly and we were definitely not disappointed!

He marked our map with recommendations and Sam and I did our best to follow suggestions. For the most part we were successful, though we did get lost a few times on the way. Today’s rented e-bikes handled our off-roading beautifully. Cruising through sandy cow paths under the Burmese blue skies and happening upon glorious, seemingly forgotten temples still as lovely as when they were first built is not a memory I will soon forget.

We had a great time and I couldn’t have wished for a better, more easy-going or down-for-anything travel companion than Sam Geary. Wish you were here in Mandalay with me Sam! Safe travels and I’ll see you soon. Now, I’ll let my photos do the talking.

The Golden Palace of Bagan. Who lived here and when? Not clear from the signage. Still a cool spot though.

One of the thrones in the Golden Palace of Bagan.

Why climb the temple? Because it is there, of course.

One of the many temples we visited in our wanderings the past few days.

Buddha bathing in cash. Does anything seem strange here? 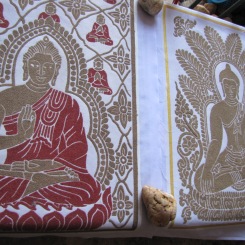 After meeting Mr. Aung yesterday it seems that artists are everywhere in Bagan, painting and selling their ways in any available space.

The most patriotic boat on the water.

Offerings at another one of the many temples we visited.

Moments such as when a herd of cows crossing the road truly give you a sense of Myanmar’s past. 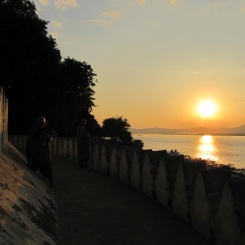 Sunset over the Irrawaddy River. Look closely in the shadows and you’ll see one monk photographing his friend with a Samsung tablet.

Temples are everywhere in the plains of Bagan.

How old are the wall paintings in the temples? Who knows! They are cool either way. 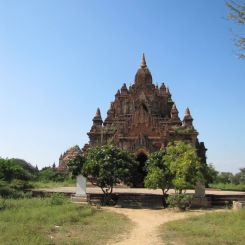 We happened upon a few temples where there were virtually no other tourists.

3 thoughts on ““Quality” Time in Bagan”