Two in one day! I must be on a roll! Really though I just woke up and don’t really have a plan for the day besides catching an overnight bus this evening, so this seemed like as good as any activity since Internet will probably be scarce in the next few days. 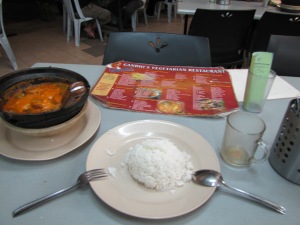 When I landed in Kuala Lumpur, I had no idea what to do or where to go or what to expect. I was clever enough to get out of the airport (via bus, which took two hours due to traffic) but then was a bit at a loss once I got to KL Sentral, which is the central transit station downtown. It was about 7 pm, so all the tourist windows were closed. Traveling like I do one really comes to rely on these information centers to give some guidance, or at least a map of the new locale. Already weary from the travel, I was willing to stay at whatever was closest if it was a reasonable price. Lo and behold, I came upon a pile of pamphlets for “Central Backpackers Hostel – located near KL Sentral!” It had a map on the back. I took it and ran, or shuffled as fast as I could with packs strapped to my front and back.

I found it relatively easily, though I was stalled a bit because I had to look up. The hostel was on the fourth floor of a busy building filled with karaoke bars and massage parlors. But it was there! I got a bed for the night and directions to a good Indian restuarant from the proprietor. He directed me to a place called Gandhi’s, which was completely vegetarian and packed with locals. I got a “fish” curry, pictured above, and some masala tea, which was drunk before the food arrived. Yum! This whole set-up cost 12 ringgit, which is about 4 USD. One thing about Malaysia is that the prices look like they would look at home (eg $12 for dinner in a diner-style restaurant) but they really only cost a third of the price. Not bad! 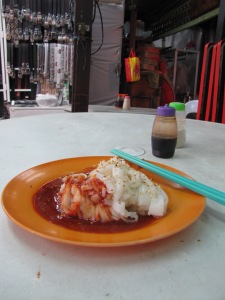 While I am talking about food, here is another plate from Kuala Lumpur, this time from Chinatown. I had been wandering around all day and was willing to take a chance on an eating establishment set up in the street. I communicated that I am vegetarian and liked spicey food and waited for whatever to appear. This is a plate of soft, wide rice noodles with spicy and some sweet sauce topped with sesame seeds. It was gone in about a minute. 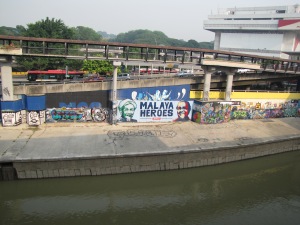 Kuala Lumpur means “muddy estuary” in Malay, and this river is one of the tributaries to said estuary. Not so grand anymore, but it used to be an import way to transport clay. Now it is banked by concrete, with parts of the seawall tastefully decorated by graffiti. I thought the Obama-esque “Malaya Heroes” was particularly interesting.

This was a student protest that started in Chinatown and later moved to a more open space. One of the guys I asked said that they were protesting corruption in the government and that they wanted a fair voice for all. Sounds good to me, but my dad’s warning to stay away from political rallies sounded in my head so I moved on. A couple days later I saw a newspaper article that said the turn-out was lower than expected and that the police got involved because the protestors did not have a permit to be on whatever premises. Yikes! Glad I went and had some noodles instead. 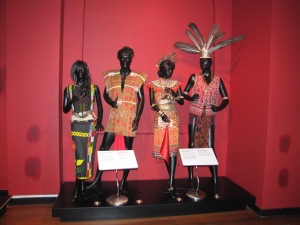 The National Textile Museum in Kuala Lumpur has me absolutely smitten. There are step-by-step diagrams for how many different kinds of fabrics are made and beautiful displays of the finished products. This was one of my favorite museums so far. I tried to show some restraint in taking photos since flash is not allowed in the dark rooms, but for some of the local, traditional costumes I just couldn’t help myself.

Malaysia is a Muslim country, but there is a good mix of religions with places of worship in the city. This is a Taoist Temple, which is across the street from a Hindu temple and down the block from a church. 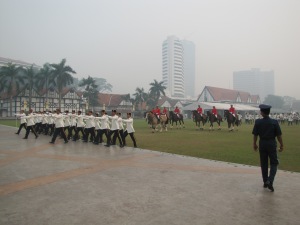 One Monday morning I was doing a walking tour of the government headquarters of the city and we happened upon the weekly flag-raising ceremony. It was cool to see the uniforms and hear the national anthem, but what strikes me about this picture is the smog! It was so bad that you can barely see across the street. Firsthand glimpse of international pollution. I got a bad cough, runny nose, and irritated sinuses that have been bothering me since then, though being in seaside Hoi An they seem to be clearing up. Yeah!

One thought on “Images of Kuala Lumpur”