Slowly but surely I am getting these photos uploaded… 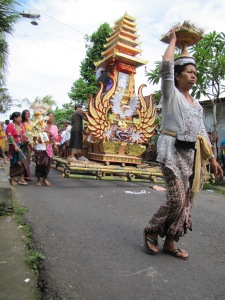 One day in Ubud I happened to stumble upon a funeral procession. Ladies carried all manner of offerings on their heads while the men carried a large tower (the taller the tower the richer the deceased) followed by a larger-than-life paper mache bull. 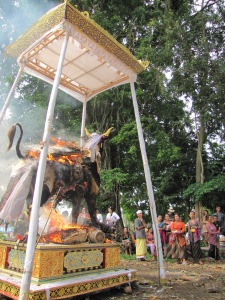 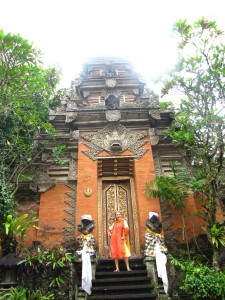 The Ubud Palace is located in the heart of downtown (if you could call it a downtown) Ubud. The courts are open to the crawling, prying, and snap-happy tourists, though the private domain where the family still lives is mercifully closed off. The fashion coordination with the palace color scheme was unintentional. 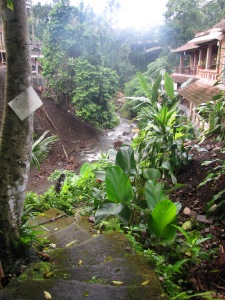 Ubud was lush and green, which is perhaps why it is so popular with the tourists. This is one sidewalk. Moody jungles and placid paddies – that is (parts) of Ubud. 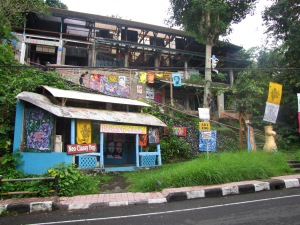 Ubus is also home to many artists. Whole families specialize in certain crafts like painting or woodcarving, and the knowledge is passed on from generation to generation. This is but one gallery, touting itself as the “Art Zoo.” When I walked by they were playing an Adele CD loud and clear. 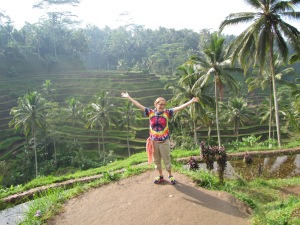 Another famous feature of Ubus is the terraced way in which rice is grown. Some paddies are very small – only a few square feet at a time! 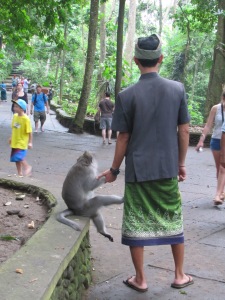 Bali was featured in the Amazing Race, which I watched with my parents before departure. One site of the contest was in the Monkey Forest, located in Ubud, so I made a point to go there, which I have written about before. The monkeys were friendly enough, though if you try to shoo them away while they are trying to take your stuff they can get nasty. But this guy works in the forest and seems to have a good rapport with the residents. 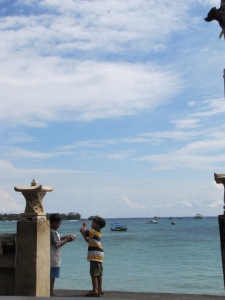 Kite flying is a popular sport for little boys. The seaside, with its winds and lack of obstructions like trees and powerlines, is a perfect location. These little boys played all afternoon, running up and down the seawall on Nusa Lembongan Island. The kite is just a tiny speck at the top-center of the picture. 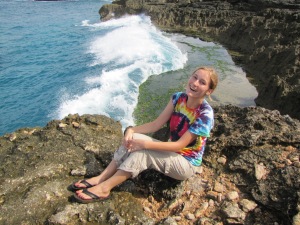 This rocky point is marked as “Devil’s Tears” on the map, which I found by following a cow path through a grassy plain near the beach. What a show! I am very thankful to have been above the water and not in it. A few minutes after this picture was taken a wave came in that practically reached the spot where I was previously sitting. Quote from that moment: “Let’s get out of here!”

One thought on “Images of Bali”